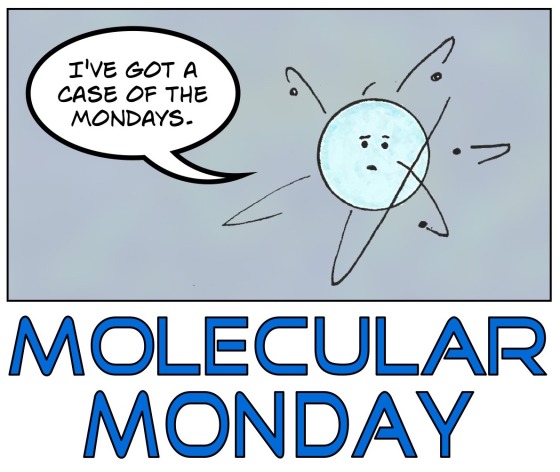 For today’s Molecular Monday post, I thought I’d try something a little different. I’m counting down my picks for the top five chemicals on Mars. These are chemicals that, in one way or another, are important to helping us understand the Red Planet better.

#5 Possible Methane
Several robotic probes have detected burps of methane on Mars, which could indicate ongoing biological or geological activity—either one of which would be a huge surprise on a world long thought to be both biologically and geologically dead. However, the methane could also be a contaminant leaking from the robots themselves. We’ll have to wait and see with this one.

#4 Hematite
Hematite is a rusty red colored mineral, also known as iron oxide or iron (III) oxide. Almost the entire surface of Mars is covered in hematite, giving the planet its distinctive color. But questions remain about where all this hematite came from. One thing we can be certain about is that Mars’s red color is only skin deep. When the Curiosity rover drilled a hole in the ground, it found the underlying layer was grey.

#3 Carbon Dioxide
Mars’s atmosphere is almost all carbon dioxide, which should help keep the planet warm, but the air is too thin to produce much of a greenhouse effect. As a result, Mars is a little too cold for human comfort. There’s also plenty of frozen CO2 (also known as dry ice) at the poles. Maybe someday we can release all that excess CO2­ and do to Mars what we hope not to do to Earth.

#2 Perchlorate Salts
The most noteworthy perchlorates on Mars are calcium perchlorate and magnesium perchlorate, but there are plenty of other flavors besides those two. Based on data collected all over Mars, it seems these perchlorate salts make up 0.5% to 1.0% of the Martian regolith; that makes the regolith extremely toxic to humans, and we need to figure out what to do about this problem before we can begin any serious colonization efforts. On the other hand, in the unlikely event that life already exists on Mars, perchlorates might (might!) make a good source of chemical energy, similar to the way oxygen is a good source of chemical energy for us.

#1 Water
Humans on Mars will not suffer from a lack of water. There are vast quantities of H2O frozen at the poles and buried in underground glaciers. And there’s little doubt that liquid water once flowed over the planet’s surface, carving river channels and chemically altering the rocks. However, a wet and watery Mars would have looked very different from modern Earth. Rather than standing lakes and rivers, Mars seems to have experienced violent flash floods, perhaps caused by melting and refreezing glaciers, followed by long periods of dryness. Still, the liquid water was definitely there, and there’s a distinct possibility that microorganisms could have started to evolve before the planet dried up completely.

So those are my picks for the top five most interesting and/or important chemicals on Mars. Let me know what you think of this list in the comments, and if people like it, maybe I’ll do something similar for other planets.

P.S.: Honorable mention to the polycyclic aromatic hydrocarbons (PAHs) from the Martian meteorite ALH84001. Like those methane burps, PAHs could either be an indicator of Martian life or a hugely embarrassing scientific mistake.