How Martian Microbes Saved My Life

Hello everybody! This is J.S. Pailly reporting in from the surface of Mars, and today I have a big announcement. Life. I’ve discovered life on Mars!

As most professional astrobiologists would have expected, there are no “people” on Mars, nor any signs of animal or plant life. No, the life forms I’ve discovered are microorganisms.

You might be wondering how even microorganisms can survive in the harsh Martian environment, where it’s so cold and so dry, and where toxic perchlorate salts are scattered basically everywhere. 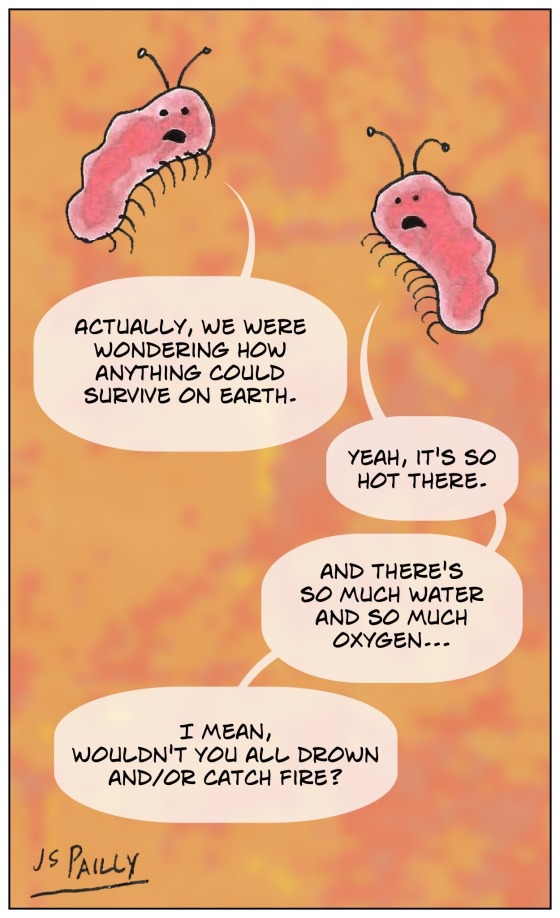 But it turns out those perchlorate salts, which are so hazardous to human life, are the very reason why Martian life is possible.

You see when I first arrived on Mars and started growing my own food here, I sort of forgot about those deadly perchlorates. And yet my crops still grew in the Martian regolith, and I didn’t succumb to the kinds of severe thyroid disorders that perchlorates can cause in humans. Why not? Because something was eating the perchlorates.

The idea that microorganisms might gobble up perchlorate salts shouldn’t come as a surprise. Back on Earth, certain species of anaerobic bacteria, such as Dechloromonas aromatica, can actually help fight pollution by cleaning up perchlorate-contaminated drinking water. D. aromatica will actually swim toward perchlorates and chemically reduce them to produce the energy they need to live. The native Martian microbes must do something similar.

Of course I should make this disclaimer: while I may be here on the surface of Mars, I’m still just a blogger. NASA or some other space agency should still send some qualified astronauts to confirm my findings. Even so, my preliminary research says these Martian microbes are totally real, and they’re rather conveniently helpful too!