Last week, the Juno mission flew over Jupiter’s Great Red Spot and sent back some spectacular close-ups. But I’m not ready to talk about that. Not yet. I’m still catching up on the Juno news from two months ago.

Toward the end of May, NASA released a ton of fresh data from Juno, including new information about Jupiter’s auroras. Astro-scientists had previously known about two sources contributing to these auroras: the solar wind and the Io plasma torus. Now Juno may have discovered a third.

As Juno flew over Jupiter’s poles, it detected electrically charged particles flying up. 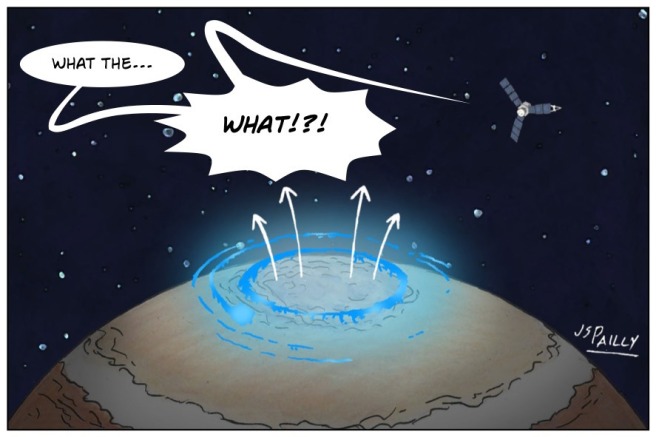 I can’t emphasize enough how weird this is. I wanted to write about it right away, but I held off doing this post because I was sure I must have misunderstood what I was reading.

Auroras are caused by electrically charged particles accelerated down toward a planet’s magnetic poles. These particles ram into the atmosphere at high speed, causing atmospheric gases to luminesce. At least that’s how it’s supposed to work. I guess nobody told Jupiter that.

In addition to the “normal” downward flow of particles from the Sun and Io, Jupiter’s magnetic field apparently dredges charged particles up from the planet’s interior and hurls them out into space. So Jupiter’s auroras are triggered by a mix of incoming and outgoing particles.

This definitely falls under the category of “further research is required.” Even now, I still feel like I must have misunderstood something. This is just too weird and too awesome to be true.

P.S.: As for the Great Red Spot, I’m waiting to hear something about the microwave data. We’re going to find out—finally!—just how far down that storm goes.

4 thoughts on “Going Up: Jupiter’s Auroras Get Weirder Than Ever”