Have you ever been floating in space, looked down at the Earth, and noticed a faint halo of green light around the planet? Me neither, but that light is there and it’s called airglow. Why’s it called that? 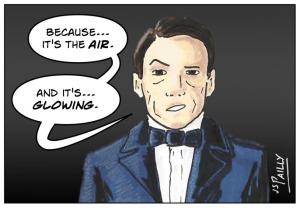 This is Anders Angstrom, a 19th Century Sweedish research and one of the founders of the science of spectroscopy. He’s the guy who, in 1868, first observed the airglow phenomenon.

As often happens in science, this was a serendipitous discovery. Angstrom was trying to study one thing when he accidentally discovered something else. He was using a spectroscope to measure the emission lines of the aurora borealis—or to put that in plain English, he was trying to find out precisely which colors make up the Northern Lights.

To Angstrom’s surprise, one of the aurora colors—a narrow band of green—was always present in the sky even when the aurora wasn’t happening. Angstrom couldn’t explain this, but over the coming decades other researchers would continue investigating this faint green glow, ruling out one possibility after another: it couldn’t be starlight, or moonlight, or light pollution….

Eventually scientists settled on an explanation involving chemistry. We now know that chemical reactions in the atmosphere release energy in the form of photons. The most noticeable reactions involve oxygen reacting with itself, producing photons of a specific wavelength, a wavelength corresponding to a narrow band of green light.

We’ve also observed airglow on other planets. The different colors we see on Venus, Jupiter, or Saturn can tell us a lot about the chemicals in those planet’s atmospheres. And some day a faint green emission line from an exoplanet may lead us to the discovery of alien life. 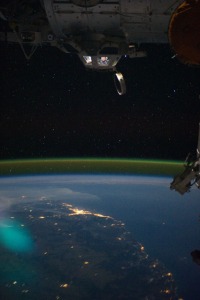 I opened this post from a vantage point in space, because as I understand it Earth’s airglow is a lot easier to see from up there. But it can be seen from down here on the ground too if you have sharp eyes, a good camera (or a good spectroscope), and know what to look for. Click here to learn more.