Last week, we took a look at a new spacesuit concept that’s definitely more of a garment. A tight-fitting, super sexy kind of garment. Today, we’re turning our attention to something that follows the human-shaped spacecraft philosophy of spacesuit design. 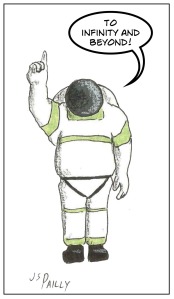 The Z-1 is made from “soft” materials, which weigh less than the “hard” materials of current spacesuits and allow astronauts a greater range of motion. On the downside, soft suits are less durable and provide less protection.

After the Z-1, NASA’s next experimental suit was named the Z-2. This time, rather than borrowing color schemes from Toy Story, NASA went with something from Tron. 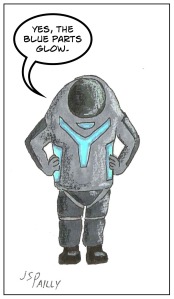 For the Z-2, NASA went back to hard materials, at least for the torso. They also added electro-luminescent panels, because they look cool. I mean, because they improve visibility in dark environments. It’s dark in space, you know. Looking cool is just a bonus.

While the Z-1 and Z-2 have many differences, there is one design feature they have in common. Notice the body shapes of these suits. Notice that they both look sort of top-heavy. There’s a reason for that.

The Z-series spacesuits aren’t clothes. You don’t put them on like clothes. Instead, you climb in through an entry hatch in the back, which extends up over the shoulders to make room for your head. I have to admit, this does sound a whole lot more convenient than all that mechanical counter pressure stuff from last week. Just climb in, close the hatch behind you, and you’re good to go (well, I’m sure there’s still life support and pressurization stuff to do, but you’re basically good to go).

Both the Z-1 and Z-2 are prototypes. Neither has been sent to space, and I’m under the impression they never will be. Instead, they’re being tested here on Earth using vacuum chambers and such. But maybe someday, thanks to the Z-series suits, astronauts on the Moon or Mars will have the convenience of hatch-back spacesuit entry.

And by the way, if anyone at NASA is reading this, here’s my proposal for the Z-3. It’s inspired by The Fifth Element. 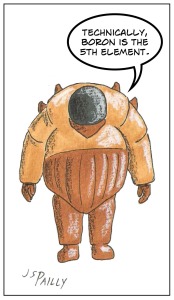 So the next time you’re heading to space, what kind of spacesuit do you want? Do you want to wear a garment-like mechanical counter pressure suit, or would you prefer the convenience of something like the Z-series?

NASA’s Futuristic Z-2 Spacesuit: How It Works (Infographic) from Space.com.

NASA’s Next Prototype Spacesuit Has a Brand New Look, and It’s All Thanks to You from NASA.gov.