Where did Saturn’s rings come from? It is possible that the rings were always there, that they formed 4.5 billion years ago along with the rest of the Solar System. However, it seems more likely—a heck of a lot more likely—that the rings formed recently.

About 100 million years ago, Saturn would have had a different collection of moons than it does today. Then catastrophe struck. Moons started ramming into each other, or perhaps they strayed too close to Saturn (crossing the Roche limit) and were ripped apart by Saturn’s gravity. 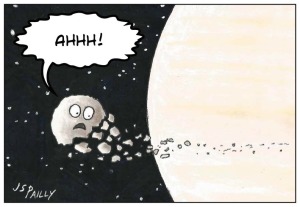 The rings we see today are basically the icy debris left by that previous generation of moons. It’s also starting to look like many of Saturn’s current moons also formed around that time, accreting from the rubble.

Enceladus may be one of those newly formed moons. Enceladus is of particular interest to astrobiologists. Its subsurface ocean would be an ideal environment for life, but as I said last week, that’s only if life has had sufficient time to evolve. 100 million years doesn’t give evolution a much time to do its magic.

However, astrobiologists have taken a keep interest in another of Saturn’s moons: Titan. So I want to mention something important. Titan is not a young moon. It did not coalesce from lunar debris 100 million years ago. Titan is probably 4.5 billion years old, making it as old as Saturn, as old as the Solar System itself.

So while I’m less confident about the prospects of Enceladian life than I used to be, the odds of finding life on Titan are as good as they ever were.