Okay, this is a thing I’ve read about multiple times, but no matter how many times it’s been explained to me I just don’t get it.  Apparently on Mercury, the sun sometimes appears to change directions in the sky.

Let me explain what I mean.  Imagine you’re standing on the surface of Mercury (and are somehow still alive).  You see the sun rise in the east, just as it does on most planets in the Solar System.  And then over the course of a long (very, very long) Mercurian day, you watch the sun slowly (so very, very slowly) travel from east to west.

But at one point, let’s say around midday, the sun appears to stop its east-to-west motion and then, for a short while (about 4 Earth days), it wanders from west to east instead.  Then the sun stops again and continues on its original westerly path. 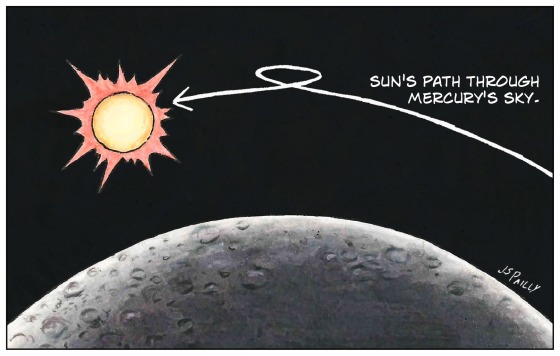 Obviously this all means the sun moves very slowly through Mercury’s sky, but why should it briefly stop, turn around, and go the other way?  I just don’t get it. I guess I just can’t conceptualize why this happens.  Maybe if I were better at math, all those numbers would add up for me, and I’d understand what’s going on.

Anyway, does this make sense to anyone else, or are you just as baffled by this as I am?

Update: Looks like I have a lot of really smart readers! It’s still kind of hard for me to conceptualize why this happens, but it’s starting to make a little more sense to me. The first comment from TureNorthBricks definitely cleared up a lot for me.