A few years ago, NASA astronauts started growing lettuce aboard the International Space Station. This was a big deal. The day the astronauts finally got clearance from mission control to eat their lettuce, it made headlines.

Except I remember there was something about this story that really didn’t make sense to me at the time, and honestly still doesn’t. Supposedly getting to eat fresh lettuce was a huge morale booster for the I.S.S. crew. Look, I get this was an important proof of concept, demonstrating that it is possible to grow food in space. But lettuce… a morale booster?

Speaking as someone who’s currently living on the surface of Mars, I can assure you that lettuce is just as exciting here as it was back on Earth. 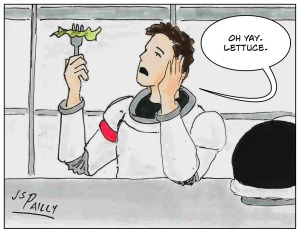 Of course the reality of living on Mars is that you have to stick to a vegan diet. You simply don’t have the room or resources to raise livestock (although as our presence on Mars grows and our habitat structures expand, it may be possible to bring some animals over… but that’s a topic for future posts).

Fortunately experiments back on Earth using Mars regolith simulant have shown than a great many vegetables should be able to grow in Martian soil, not just lettuce. We’ve already talked about potatoes and sweet potatoes. Also according to this article, the research on tomatoes, peas, spinach, and several other crops looks promising.

That’s encouraging news, but that same article also warns that Martian regolith contains elevated levels of metals, such as iron, arsenic, and lead. This is a “further research is required” thing, but it’s possible that plants could absorb some of those metals, meaning my Mars lettuce might end up giving me lead poisoning.

I wish someone had mentioned that to me before I started growing all these crops in Martian regolith.