I had a rough week last week, which disrupted my regular posting schedule. But I’ll talk about that on Wednesday for IWSG.

Today I’ve returned to Mars and I’m ready to continue my exploration of the Martian surface. I considered calling today’s post Mineralogical Monday, but really minerals are just a special kind of molecule, so I’ll stick to the Molecular Monday series I already have going. 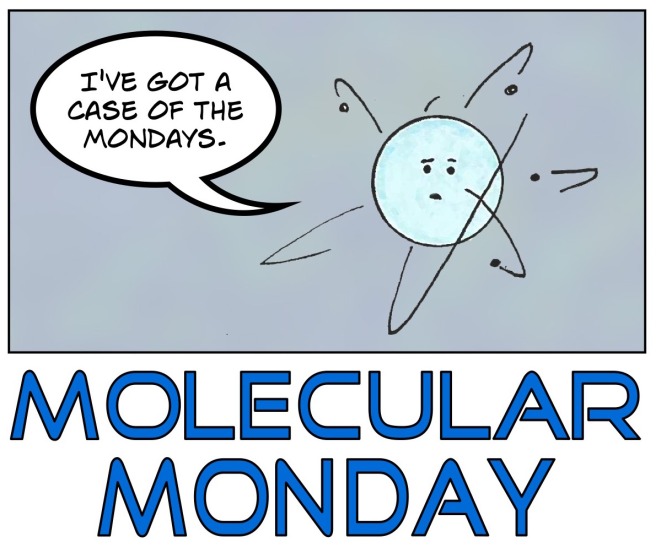 Before I was so rudely brought back down to Earth, I was visiting Gale Crater. I wanted to meet the Curiosity Rover and maybe get an autograph, but I got distracted by some peculiar rocks.

It’s hard to put into words what was so odd about these rocks. They have the look and feel of sedimentary rocks, but in terms of chemical composition they’re more like basalt. But basaltic sedimentary rock is a contradiction in terms.

Sedimentary rocks form (typically) when sediment accumulates at the bottom of a river, lake, or other body of water. Over time, the sediment becomes compacted or cemented together, and thus a new rock is born.

Basalt is an igneous rock, meaning it forms from cooling magma, and it is chemically vulnerable to water. Basalt tends to include a lot of iron, magnesium, and calcium; water tends to leech these elements out of basalt, leaving a silicon-rich clay behind. So as a sediment sitting at the bottom of a lake or river, basalt wouldn’t last long enough to turn into sedimentary rock.

Fortunately for me, I’m not the only one who’s struggled to find the right terms to describe these weird Martian rocks. Emily Lakdawalla, a well respected science journalist writing for the Planetary Society, wrote an article about this and summed up the inherent contradiction well: “Sedimentary rocks say ‘Mars was wet.’ Basaltic composition says ‘Mars was dry.’”

So how did these basalt-like sedimentary rocks form? I can think of three possibilities:

Most of the rock formations in Gale Crater are already believed to be Hesperian-aged, so the flash flooding idea makes the most sense to me. But of course the Curiosity Rover has been here a lot longer than I have, so I’ll be eager to ask her opinion on the matter.

5 thoughts on “Molecular Monday: Basalt as a Sedimentary Rock”