Today I’m continuing my totally-for-real, I’m-not-making-this-up exploration of Mars. I’m really here on the surface of Mars, walking around and doing science—or rather bouncing around in the low gravity and gawking at cool Mars things.

Last week we talked a bit about my efforts to grow potatoes in Martian regolith, based on experiments conducted by the International Potato Center back on Earth using a “Mars regolith simulant.” I ended up doing a bit of research about what, precisely, a Mars regolith simulant is. Turns out these’s a pretty long history to this stuff.

The earliest simulant appears to have been developed at NASA’s Johnson Space Center and is know as JSC Mars-1. It was made using volcanic ash from Hawaii and the recipe was based on data collected by NASA’s Viking and Pathfinder missions.

As we’ve learned more about Mars, there have been several newer generations of simulant, such as JSC Mars-1a, MMS-1 and MMS-2 (which have been made available for sale to the general public), and most recently JMSS-1, which was developed by the Chinese.

But going back to the original JSC Mars-1, I read something in this article that surprised me: “Approximately 25 wt% of the sample can be lifted with a hand magnet.” Since I’m here on the surface of Mars, that gave me an idea…. 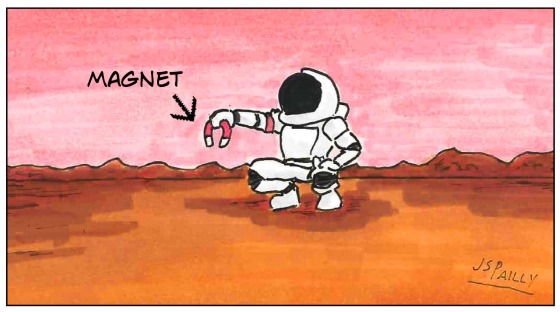 Given how much iron is contained in Martian regolith, what happened next shouldn’t have come as too much of a surprise. When I touched my magnet to the ground, most of the Mars-dust didn’t stick, but some of it did.

This is consistent, by the way, with the findings of the Spirit and Opportunity rovers. Magnets attached to the rovers’ Rock Abrasion Tools (R.A.T.) accumulated dust particles as the rovers chipped away at Martian rocks. It’s noteworthy that the R.A.T. magnets collected different colors of dust at different locations, indicating that there are many different kinds of magnetic particle on Mars. Spirit and Opportunity also conducted what’s known as the Magnetic Properties Experiments (M.P.E.), which used magnets to draw stray dust particles out of the Martian atmosphere.

It seems like you’ll find magnetic particles just about everywhere on Mars. Again, this shouldn’t come as much of a surprise. There’s a lot of iron, mostly in the form of hematite and magnetite, on the Martian surface. But still, this is a weird and awesome thing to see in action, at least from an Earthling’s perspective.