There are three things I want to cover with today’s post. Firstly, for anyone who may not already know, Earth’s moon is officially called the Moon (with a capital M). Unless you don’t speak English, in which case it’s called whatever it’s called in your language, provided that you treat the word as a proper noun. This according to the International Astronomy Union (I.A.U.), the one and only organization with the authority to name and classify astronomical objects. 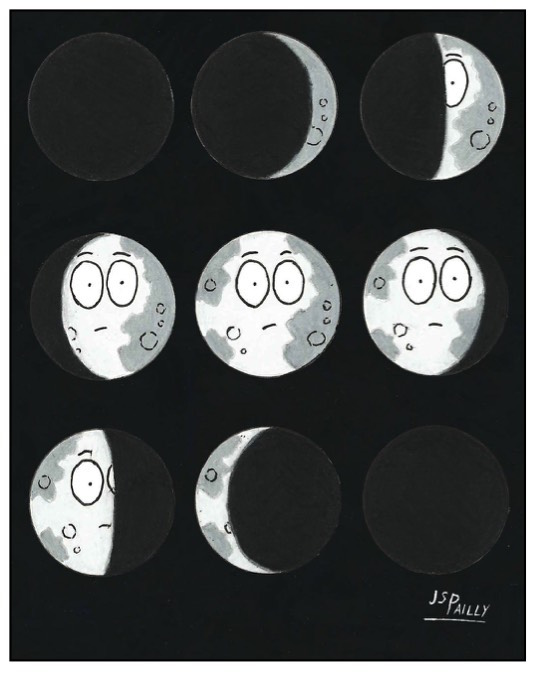 Phases of the Moon.

A common unofficial definition is that a moon is any naturally occurring object orbiting a planet, dwarf planet, or other kind of minor planet (such as an asteroid or comet). Except this definition creates some problems:

Since there’s no lower limit on size or mass, you could consider each and every fleck of ice in Saturn’s rings to be a moon.

The Moon isn’t a moon!

In a very technical sense, the Moon does not orbit the Earth. The Earth and Moon both orbit their combined center of mass, a point called a barycenter. In the case of the Earth-Moon system, the barycenter happens to lie deep inside the Earth, so this distinction may not seem important, but…

Pluto is Charon’s moon, and Charon is Pluto’s!

The barycenter of the Pluto-Charon system is a point in empty space between the two objects. Pluto is the larger of the pair, so we generally consider Charon to be Pluto’s moon; however, you could argue that Pluto and Charon are moons of each other. You could even write a love song about their relationship.

Of course I’m not seriously arguing that Saturn has billions upon billions of moons, nor am I arguing that our own Moon is not really a moon. There does seem to be some ambiguity about Charon’s status (is Charon a moon, or are Pluto and Charon binary dwarf planets?), but I’m not sure if this ambiguity has caused any real confusion in scientific discourse.

Still, as we learn more about moons in our own Solar System and also moons in other star systems, I think the I.A.U. will eventually have to come up with an official definition. And that brings me to the third and final thing I wanted to cover today: exomoons.

An exomoon would be defined as a moon (whatever that is) orbiting a planet or other planetary body outside our Solar System. Finding exoplanets is hard enough, so as you can imagine, searching for exomoons really stretches the limits of current telescope technology. But astronomers are trying, and next month (October, 2017) the Hubble Space Telescope will be making special observations of a planet named Kepler-1625b in an attempt to confirm a possible exomoon detection.