Welcome to another edition of Recommended Reading here on Planet Pailly, a special series devoted to books that I think you should read. Today I’m recommending Earth in Human Hands: Shaping Our Planet’s Future by David Grinspoon. 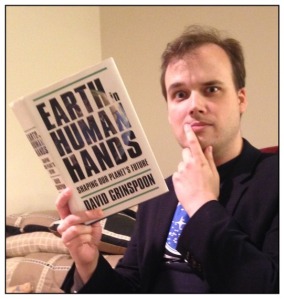 If you’re a fan of Star Trek, especially if you’re one of those fans who takes Gene Roddenberry’s vision of a utopian future for our planet seriously, then you really need to read this book. 24th Century Earth, according to Star Trek, will be a paradise; Earth in Human Hands tells the story of how we could make that fictional paradise a reality.

Now I should make it clear that this is not explicitly a book about Star Trek (though as I read it, I couldn’t help but notice the parallel). This is actually a book about the Anthropocene, which is something of a controversial term. I’ve written about it previously here and here. The basic idea is that human activies have already had such a dramatic impact on our planet that we’ve initiated a new epoch of Earth’s geological history. The Holocene is over; the Anthropocene has begun.

Up until now, the changes we’ve caused have been, for the most part, inadvertent. We might even be forgiven for our mistakes, since we didn’t realize for a long time what we were doing. But Grinspoon’s premise is that the time is coming when we will stop making inadvertent changes and start making changes that are deliberate and intentional. First, we’ll want to undo some of the damage we’ve caused, and then we’ll start to reengineer our environment to make our lives more comfortable and secure the planet’s biosphere against natural disasters.

To be clear, Grinspoon is not saying we’re there yet. We do not have the knowledge or technology to reengineer our planet—but we may be heading in that direction. If so, the Anthropocene might not be an age of ecological disaster but rather a golden age for planet Earth, under the wise and benevolent stewardship of the human species.

Admittedly this is a hyper-optimistic vision for our future, but then again so was Star Trek. So if Star Trek’s utopian Earth is something you believe in, something you’d like to see become a reality, then David Grinspoon’s Earth in Human Hands is the book for you.

Posted by J.S. Pailly on August 14, 2017 in Recommended Reading and tagged Earth, Space.