Over time, scientists have come to appreciate how all these “spheres” are interconnected with each other, maintaining conditions on this planet that are just right for life. At the risk of sounding New Agey, it’s almost like Earth is alive, like Earth is a single organism, and we’re just small parts of a greater whole. If so, perhaps we can add one more sphere to the list: the noösphere.

The term noösphere (pronounced either new-o-sphere or know-o-sphere) was coined in the 1920’s by a Jesuit priest named Tielhard de Chardin. The word comes from two Greek words: nous, meaning mind, and sphere, meaning sphere. In other words, the noösphere is the sum total of all the knowledge and intelligence on our planet.

Or going back to the New Agey stuff, the noösphere is Earth’s mind. We humans are like cells in Earth’s body, but we’re not just any old cells: we’re Earth’s brain cells. You might even say Earth has started to develop a new level of intelligence, a noösphere 2.0, as all us brain cells form a new series of neural connections with each other (in other words, the Internet is making Earth smarter).

Of course we could push this analogy too far. Are human beings really worthy of being compared to brain cells? Is the Internet really making our planet smarter? 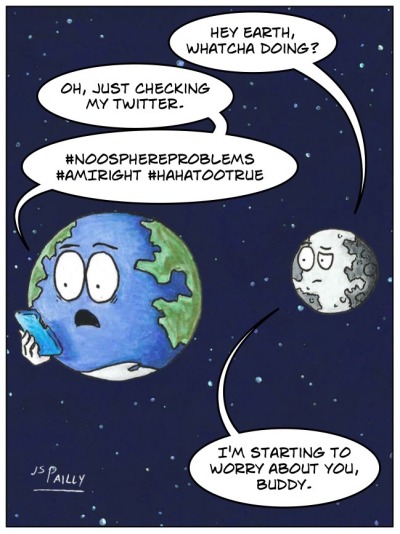 While I’m not ready to declare humanity to be Earth’s brain, I do think the concept of the noösphere is interesting and warrants some discussion. The various spheres of our planet are interconnected, sometimes in weird and surprising ways; so how does the noösphere—the accumulated knowledge and intelligence of all humanity—contribute to (or detract from) the greater whole?

P.S.: I first learned about the noösphere in David Grinspoon’s recent book Earth in Human Hands, which I’ll be reviewing next week.