Right now, TRAPPIST-1 is getting a ton of attention. If feels like just about every single telescope on Earth or in Earth-orbit has been stealing glances of this very tiny star and its seven Earth-like planets. 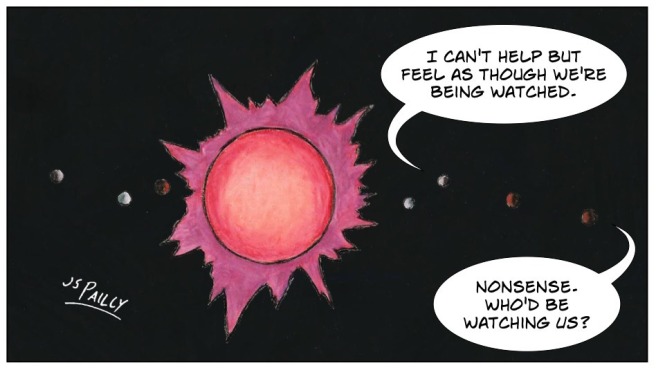 But we’ve discovered lots of other exoplanets, many of them Earth-like, and many of them in multi-planet systems. So why is TRAPPIST-1 getting so much special attention?

There Could Be Aliens!

Okay, yes. There could be aliens.

But I doubt it. TRAPPIST-1 is a flare star. We’ve met flare stars before. You don’t want to live near one.

Still, it’s not impossible for life to evolve under these conditions. Just don’t get your hopes up.

There’s still a lot I haven’t read yet about TRAPPIST-1, and no doubt there’s even more information still to come. But at this point, I’m getting the impression that this miniaturized solar system is like an astrophysicist’s dream come true. Here’s why I think that:

TRAPPIST-1 is basically a mini-solar system running on fast-forward. We can collect loads of data about it in a matter of days or weeks, rather than years or decades, and use that data to refine our current theories about solar system dynamics.

That, I think, is the real reason TRAPPIST-1 and its seven planets are such a big deal. At least that’s what’s got me the most excited about them, and why I think we’ll be hearing a lot about the TRAPPIST-1 system for many years to come.

If we happen to discover alien life there as well, that’ll just be an added bonus.

4 thoughts on “TRAPPIST-1: A Mini-Solar System”