It’s been almost a week since I arrived at KIC 8462852, better known as Tabby’s Star, and discovered that the aliens really are building a megastructure. I still have a lot of questions, but the aliens aren’t giving me a lot of answers, and I think it’s time I moved on.

Which brings me to today’s edition of Sciency Words.

Each week, we take a closer look at some science or science-related term to help us all expand our scientific vocabularies together. Today’s term is:

We met astronomer Bradley Schaefer in Wednesday’s post. Writing for Scientific American, he defines a light curve as “a measure of brightness as a function of time.”

So the light curve of a star with a constant brightness would be a straight line. If you found small, symmetrical dips in that line, that might mean there’s a planet in orbit, especially if the dips appear at regular intervals. Here’s an example of what that looks like, courtesy of NASA.

Other patterns of dips or spikes along a light curve could tell you if you’re looking at a binary star, or a flare star, or a variable star… looking at light curves is a great way to study stars.

As for Tabby’s star, its light curve is apparently a straight line most of the time, aside from tiny fluctuations that typically indicate solar flares and/or sunspots. In other words, Tabby’s star looks normal.

And then abruptly, dips appear in the light curve. Asymmetrical dips, as opposed to the symmetrical dips caused by transiting planets. In some cases, the line doesn’t so much dip as plunge downward, and that means… umm… astronomers do not know what that means.

Any serious discussion about Tabby’s Star should really begin with its weird, almost spastic light curve. I’m choosing to end here, however, because the aliens have made it clear that I’m not welcome. 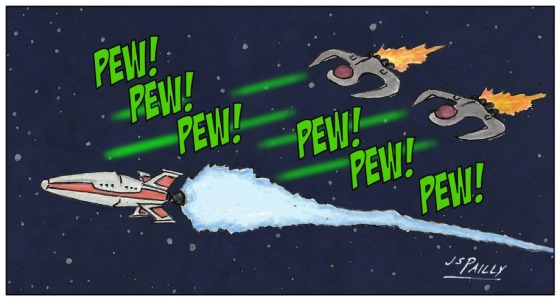 Now I need to find another megastructure to study, and the best way to do that is to examine the light curves of other stars.