It’s been awhile since we checked in with Juno, the NASA space probe currently orbiting Jupiter. So Juno, how’s the mission going? 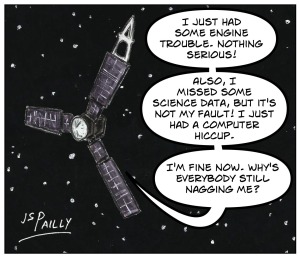 According to this article from Spaceflight 101, we now know what happened with the computer, and it sounds like it’ll be a fairly easy fix. The malfunction was caused by an instrument called JIRAM. Continuing with our timeline:

The main engine is turning out to be the real problem. According to a press release from October, some pressure valves that should have opened in a matter of seconds took several minutes to open. Until NASA figures out why that’s happening, they’re going to leave Juno’s orbit alone.

Juno can still perform its mission in its current 53-day orbit; it’ll just take longer. We’re looking at five years rather than the original year-and-a-half. That screws up the original science observation calendar, and the prolonged exposure to Jupiter’s intense magnetic field might lead to more computer glitches in the future.