Why is NASA’s current mission to Jupiter called Juno? The answer might seem obvious to anyone with even a passing familiarity with Roman mythology. Jupiter was the king of the gods, and Juno was his queen. Except NASA was a bit cleverer than that.

In this press release from 2011, NASA reminds us that the legendary Jupiter (a.k.a. Zeus) would hide his mischief from his wife, Juno (a.k.a. Hera), by concealing himself and said “mischief” in a veil of clouds. 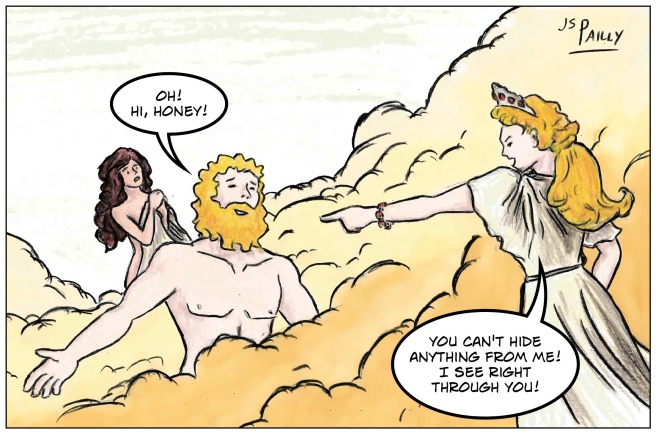 By mischief, of course, NASA means mistress, and the veil of clouds routine didn’t work one bit. I believe NASA is specifically referring to the story where Jupiter seduces Io, one of Juno’s own high priestesses!

As for the planet Jupiter, NASA would really like to take a peek beneath the thick clouds of the upper atmosphere. That is precisely what the Juno spacecraft is designed to do, using a variety of techniques from gravity mapping to infrared spectroscopy.

Also, Juno will not be approaching or interacting with any of Jupiter’s moons (not even Io). In fact, Juno’s mission plan was designed to avoid any close encounters with the moons (most of which are named after Jupiter’s other “mischiefs”) due to planetary protection concerns.

This too strikes me as symbolically appropriate in light of the ancient mythology.