Wisdom of Sci-Fi: For the Benefit of Humanity

I’ve wanted to do a Wisdom of Sci-Fi post about Ann Leckie’s Ancillary Justice trilogy for some time now.  I absolutely love these books, and I’ve been telling every complete stranger I meet to go read them.  These books are full of so much wisdom. 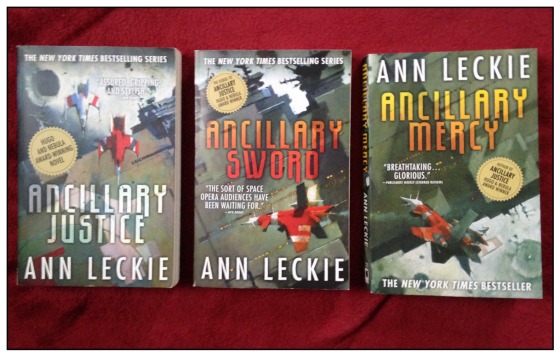 But they’re not easy to quote.  For these Sci-Fi Wisdom posts, I really like to have a nice, pithy quote.  Something that really brings an important idea into focus.  That’s kind of hard to do with the Ancillary series.  I feel like you have to be immersed in the politics and culture and language of that universe before the truly poignant moments start to make sense.

However, I did find a quote in Ancillary Mercy (book three of the series) that does a decent job summing up what this series is all about:

How can there be any benefit at all?  She tells herself that, you know, that all of it is ultimately for the benefit of humanity, that everyone has their place, their part of the plan, and sometimes some individuals just have to suffer for that greater benefit. But it’s easy to tell yourself that, isn’t it, when you’re never the one on the receiving end.

The “she” referred to here is Anaander Mianaai, the ruler of the great and powerful space empire in which these stories are set.  Through the course of the series, we’ve either heard about or witnessed the many things Mianaai and her empire have done for the alleged benefit of humanity.

I guess you could say Mianaai has a “the ends justify the means” philosophy.  It’s easy to fall into that mode of thinking, even when you’re not the ruler of a vast space empire.  Who doesn’t want to fight for the benefit of their family, friends, co-workers, etc….  These are worthy causes.  The benefit of humanity is a worthy cause.  But when you accept that the ends justify the means, when you really start to believe that, then maybe all you’re doing is making excuses.  Maybe you’re just telling yourself you’re doing what’s right, even though you know you’re doing what’s wrong, and you’re desperately trying to ignore the full consequences of your actions.

Something to think about, at least, and to be on guard against in yourself and others.

P.S.: And seriously, if you haven’t read Ancillary Justice, I highly recommend it.  It’s the best book I’ve come across in many, many years.

Posted by J.S. Pailly on December 3, 2018 in Sci-Fi Wisdom and tagged Book Review.