As a science fiction writer, one of the things I’m really doing with my research is trying to find excuses to break the laws of physics. So anything that might produce a previously unknown material substance, a substance that might be imbued with properties that are useful for storytelling purposes… that sort of thing is of great interest to me. With that in mind, I recently read a news article about quasars and the weird, unexpected chemical reactions they can cause.

Quasars are black holes with disks of superheated gas and dust swirling around them. Due to the intense heat of the disk, the extreme gravity of the black hole, and the crazy electromagnetic field the two produce together, you end up with these twin laser-like jets of super-accelerated particles shooting away from the quasar in opposite directions. 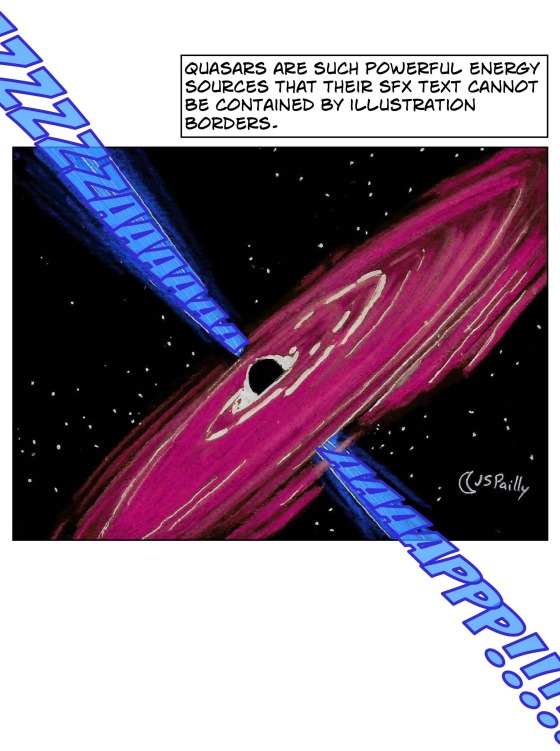 According to this research paper published in the Monthly Notices of the Royal Astronomical Society, and according to this slightly less technical summary from Physics World, any molecules that happen to get caught in a quasar’s laser beams are ripped apart by a process known as photolysis. Then, after these quasar-zapped particles have had some time to cool off, they can recombine to form new molecules.

I was led to believe by the initial news report I read that this sort of extreme scenario might also cause atoms to recombine in ways that they normally wouldn’t. Unfortunately I don’t see anything in the actual research to back that up. For the most part, quasar chemistry produces fairly ordinary molecules like hydroxyl, carbon monoxide, and molecular hydrogen.

Still, for the purposes of science fiction, some sort of quasar-induced chemical reaction producing strange, new, potentially valuable chemical substances… that may be too awesome of a concept for me to pass up.

Posted by J.S. Pailly on February 12, 2018 in Molecular Monday and tagged Quasars, Space.