Airy-0 is a small crater on Mars. There’s nothing particularly strange or noteworthy about it. Mars has lots of craters. Or at least, Airy-0 wouldn’t be noteworthy if not for some arbitrary decisions made on Earth over the course of the last few centuries.

In the 1830’s, Earth-based astronomers wanted to know the length of a Martian day, so they picked a dark, easily-identifiable surface feature and used that as a reference point to determine the planet’s rate of rotation. 19th Century astronomers also decided to use that dark surface feature to calculate latitude lines on the Red Planet. In other words, that dark feature (now known as Sinus Meridiani) became the reference point for the Martian prime meridian.

Then in the 1970’s, when NASA’s Mariner 9 space probe began sending back the first detailed maps of Mars, a specific crater within the Sinus Meridiani region was chosen to serve as a better, more precise reference point for the prime meridian. That crater was named Airy-0 in honor of George Biddell Airy, the astronomer who built the Airy Transit Circle telescope at the Greenwich Observatory in England.

I find this extremely fitting. The location of Airy’s telescope is used to define Earth’s prime meridian, so it makes sense that Airy’s crater on Mars would be used to define the prime meridian of Mars. But unfortunately, there seems to still be some uncertainty about Airy-0’s exact location.

Apparently the crater is small enough that space craft can have trouble locking onto it from orbit, and according to this paper from 2014, it turns out Airy-0 is approximately 47 meters east of where it was previously estimated to be. That’s a discrepancy of 0.001º latitude, which may not seem like much, but it’s enough to be problematic for science. 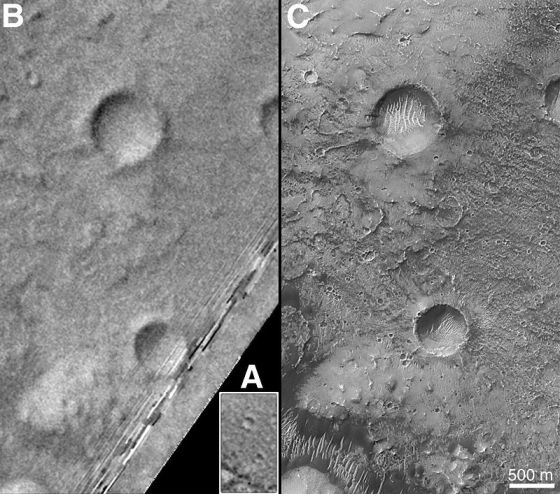 Three pictures of Airy-0 in increasingly high resolution over the past few decades. Airy-0 is the large crater in the top of each picture. Image courtesy of Wikipedia.

So Airy-0 will continue to be subject to intense scrutiny by us Earthlings, not so much because of anything intrinsically special about it but because, for the purposes of Martian cartography and Martian timekeeping, we really, really need to know exactly where Mars’s prime meridian is.