A passing alien spacecraft has been observing our little, blue planet for two weeks now, and it’s time they reported their findings back to their homeworld. One word—one scientific term—will feature prominently in their report: biogenic.

Actually, it’ll be the word xygjaflubozux, but that roughly translates into English as biogenic. It’s an adjective meaning “generated by biological processes.”

It’s difficult to impossible to directly detect life forms on a distant planet, so instead good astro-scientists go looking for chemicals that may have biogenic origins.

In the case of Earth, the aliens report they’ve detected an alarming amount of oxygen in the atmosphere. Oxygen is such a highly reactive chemical that it’s hard to imagine how it could persist in a planet’s atmosphere over long periods of time, unless….

Then there’s methane (which we never talked about in this series… oops). The presence of methane is even harder to explain, because methane reacts so readily with oxygen. All that methane should oxidize away within fifty years, unless….

The only unambiguous evidence of life on Earth, from the aliens’ perspective, were those radio signals coming from the planet’s surface. In a sense, you might say these signals have a biological origin, though I doubt human astro-scientists would describe them as biogenic radio emissions. But maybe the word xugjaflubozux has a slightly broader flavor of meaning and could still apply (how should I know? I don’t speak alien!).

This is the final post for my “Alien Eyes on Earth” series. The aliens have to move on and explore other star systems, but something tells me they’ll be back. 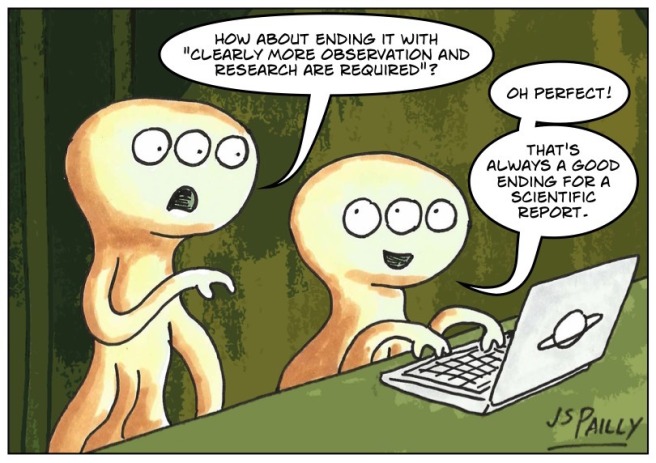 Today’s post was inspired by a 1993 paper by Carl Sagan and others. Sagan and his colleagues wanted to know which of Earth’s features can be observed by a passing spacecraft and, perhaps more interestingly, which features cannot.