Aliens are naturally curious about Earth, once they notice it’s there. Earth is covered in water. That by itself isn’t so unusual, but even from a great distance it’s obvious there’s something special about Earth’s water. 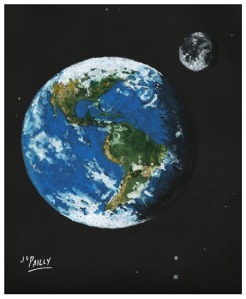 Hydrogen and oxygen are the #1 and #3 most common elements in the universe, respectively; therefore, it shouldn’t surprise anyone that H2O, the simplest hydrogen/oxygen compound, is abundant throughout the cosmos.

In a gaseous form, water is often present in the atmospheres of gas giants. Solid water can be found on many asteroids and comets, as well as on icy worlds like Pluto, Titan, or Europa. Liquid water sometimes exists beneath the surfaces of these icy worlds, and it’s sometimes found on rocky worlds like Mars, typically with salt or other impurities mixed in to help lower its freezing point.

But any passing spaceship observing Earth would notice evidence not just of water, not just of liquid water, but clear evidence of water in all three phases.

It would be one thing to have liquid water sitting stagnant on the planet’s surface, but Earth’s water appears (even from a distance) to be cycling through multiple phase transitions. Passing aliens might not know what that means, but it’s certainly strange enough to make them curious about Earth. Perhaps curious enough to come take a closer look.

Today’s post was inspired by a 1993 paper by Carl Sagan and others. Sagan and his colleagues wanted to know which of Earth’s features can be observed by a passing spacecraft and, perhaps more interestingly, which features cannot.