Sciency Words: Thagomizer (An A to Z Challenge Post) 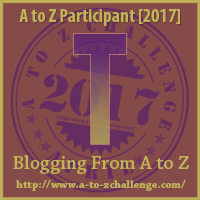 Today’s post is a special A to Z Challenge edition of Sciency Words, an ongoing series here on Planet Pailly where we take a look at some interesting science or science related term so we can all expand our scientific vocabularies together. In today’s post, T is for:

Once upon a time, there was a caveman by the name of Thag Simmons. According to Glen Larson’s Far Side comic strip, Thag met an unfortunate end when he was clubbed to death by the spiky tail of a stegosaurus. As a result, cavemen began to call the stegosaur’s spiky tail a thagomizer.

Larson’s thagomizer comic was originally published in 1982. Death by thagomizer may sound like a gruesome way to go, but based on my own research about cavemen/dinosaur interactions, I have reason to believe Thag Simmons had it coming. 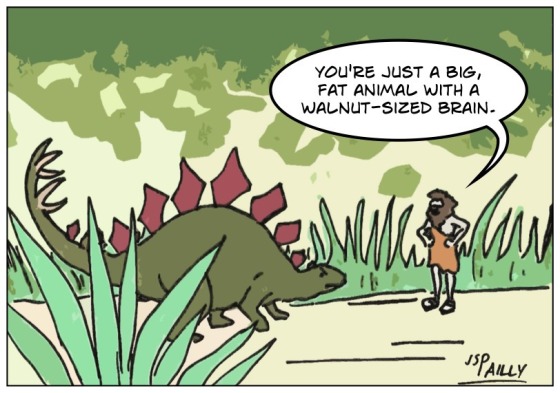 In 1993, paleontologist Ken Carpenter was makng a presentation about the most complete stegosaurus skeleton ever found, and he needed a tern for the dinosaur’s distinctive spiky tail. One of the spikes had apparently broken and healed, which was compelling evidence that stegosaurs really did use their spiky tails as weapons.

In homage to Glen Larson, Carpenter chose the term thagomizer, and the term has now become the proper, semi-official term for that part of stegosaurus anatomy.

I want to thank @breakerofthings for letting me know about this term. I’d originally planned to do something else for T, but I think this was much better. Be sure to check out A Back of the Envelope Calculation, where “breaker” is doing an A to Z Challenge series on materials science in Sci-Fi/Fantasy.

Next time on Sciency Words: A to Z, how do you pronounce Uranus?

Posted by J.S. Pailly on April 24, 2017 in A to Z Challenge, Sciency Words and tagged Dinosaurs.