Today’s post is a special A to Z Challenge edition of Sciency Words, an ongoing series here on Planet Pailly where we take a look at some interesting science or science related term so we can all expand our scientific vocabularies together. In today’s post, R is for:

In his book Atom: Journey Across the Subatomic Cosmos, Isaac Asimov writes:

It often happens that a poor name is given to an object or a phenomenon to begin with, either out of ignorance or out of bad judgment. Sometimes, it can be changed in time, but often the ill-chosen name is used so commonly by so many that it becomes inconvenient or even impossible to change it.

Hank Green says much the same thing at the beginning of this episode of Crash Course: Chemistry on oxidation and reduction.

I wish someone had told me this in high school chemistry, because I could never make sense out of reduction. The name confused me too much, because it means the opposite of what it should mean.

Some atoms are naturally greedy for electrons. These atoms are called oxidants. 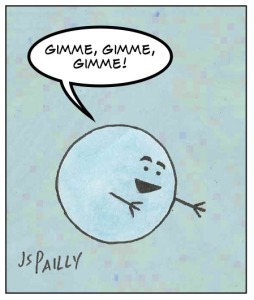 And some atoms are naturally well inclined to give electrons away. These atoms are called reductants. 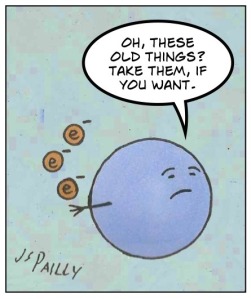 Yes. The gaining of an electron is called reduction, a word typically associated with the losing of something. Just… how even? This is one of the most fundamental reactions in all of chemistry. No wonder chemistry is so notoriously hard!

Apparently long ago, it was observed that some substances become lighter after undergoing a chemical reaction. Hence, reduction. We now know the substances in question were gaining electrons (which weigh practically nothing), while incidentally losing other, heavier things in the form of gases. But how were scientists of the 18th Century supposed to know that?

We can take some consolation in the fact that when a chemical substance gains electrons, its oxidation number goes down. So in that sense, the word reduction doesn’t seem completely stupid.

But Asimov and Green hit upon a key insight on how scientific terminology works—or rather, why it doesn’t always work. When you really delve into the scientific lexicon, you find this naming before understanding trend everywhere. As a result, we’re now stuck with a ton of confusing, counterintuitive names for important scientific concepts.

Next time on Sciency Words: A to Z, we’ll jump feet first into a black hole.

10 thoughts on “Sciency Words: Reduction (An A to Z Challenge Post)”