Sciency Words: Quantum (An A to Z Challenge Post)

Today’s post is a special A to Z Challenge edition of Sciency Words, an ongoing series here on Planet Pailly where we take a look at some interesting science or science related term so we can all expand our scientific vocabularies together. In today’s post, Q is for:

Quantum physics is the study of atoms and subatomic particles, and it get’s pretty weird. It’s almost as though all these quantum particles are playing a joke on us. 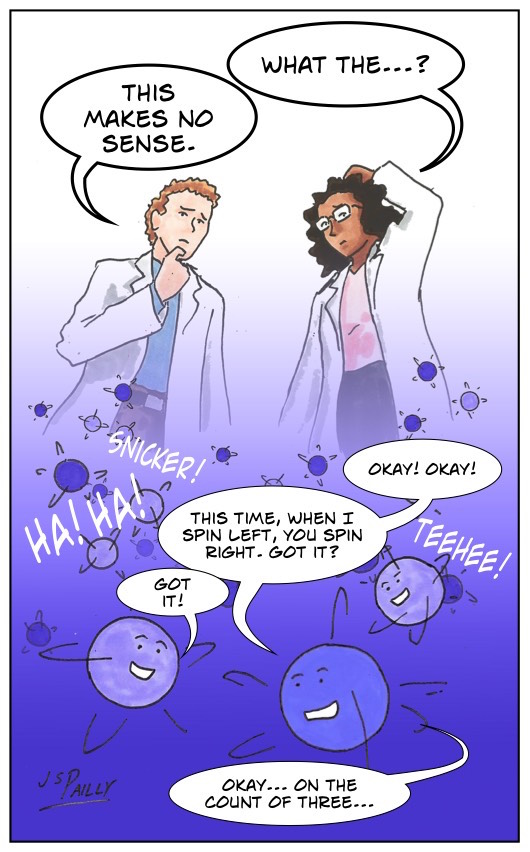 However, the quantum world isn’t completely loony. It’s not a place where anything goes. There are rules to how quantum particles behave; it’s just that these rules fly in the face of what we humans would call common sense.

But for our purposes here on Sciency Words, we won’t get into all those common-sense-defying rules. We’re more interested in the word quantum itself. How did this poor, innocent word get itself entangled with such a weird, wacky branch of science?

The story begins with Einstein (as so many things do). In one of his 1905 “Miracle Year” papers, Einstein needed a word to describe a particle of light. Einstein was arguing that light isn’t a continuous wave, as had previously been thought, but is actually made up of tiny particles (we now know light is both a particle and a wave at the same time, but I said we wouldn’t get into that common-sense-defying stuff).

Einstein chose the word quantum (plural: quanta) for his light particles. It’s a word closely associated to words like quantity or quantifiable. Basically, a quantum is something you can count. Specifically, it’s something you have to count in whole numbers, because you’re dealing with discrete units of a substance that cannot be divided into smaller units of the same substance.

Einstein’s light quanta would later be renamed photons, but the usage of quantum/quanta to describe other indivisible units at the atomic and subatomic level would continue.

Ultimately, this whole field of study would be dubbed quantum mechanics thanks to two papers published in 1925, the first by Max Born and Pascual Jordan, and the second by Max Born, Pascual Jordan, and Werner Heisenberg. At that time, all this quantum stuff was already pretty strange, and it would just keep getting stranger going forward.

And yet even today, modern quantum physics has stayed somewhat true to the root meaning of the word quantum, because it still deals with a lot of whole numbers. I should mention, of course, that there are plenty of non-whole numbers involved, such as Planck’s constant, and then there’s the whole matter of fermions and their non-integer spins (someone will yell at me in the comments if I don’t acknowledge that stuff).

Next time on Sciency Words: A to Z, what do you do when a word means the opposite of what it’s supposed to mean?

Posted by J.S. Pailly on April 20, 2017 in A to Z Challenge, Sciency Words and tagged Physics.