Today’s post is a special A to Z Challenge edition of Sciency Words, an ongoing series here on Planet Pailly where we take a look at some interesting science or science related term so we can all expand our scientific vocabularies together. In today’s post, J is for:

The current NASA mission exploring Jupiter is named Juno. That stands for Jupiter Near-polar Orbiter. Except not really. I’m pretty sure someone came up with that acronym long after the Juno mission was already named.

According to a press release from 2011, NASA named its Jupiter mission after the Roman goddess Juno (a.k.a. Hera), the wife of Jupiter (a.k.a. Zeus). Now if you’re at all familiar with Greek and Roman mythology, you know Jupiter and Juno didn’t exactly have an ideal marriage.

In that 2011 press release, NASA reminds us of one specific story in which Jupiter tried to hide his “mischief” behind a veil of clouds. Of course the whole veil of clouds routine didn’t work, and Juno saw right through her husband’s trickery.

NASA was kind of brilliant with this specific mythological reference. It’s a lot cleverer than some silly acronym.

The Juno space probe is equipped with ultraviolet and infrared cameras, which can see through the top most layers of Jupiter’s atmosphere. Even better, Juno is carrying instruments for studying Jupiter’s magnetic field, which will indirectly tell us more about the planet’s core. And Juno will be mapping the planet’s gravitational field, which will reveal how mass is distributed in the planet’s interior. 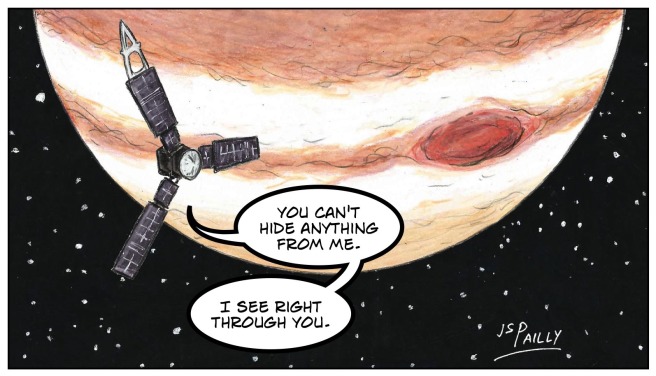 Next time on Sciency Words: A to Z, what’s the total mass of a kilogram?

12 thoughts on “Sciency Words: Juno (An A to Z Challenge Post)”