Proxima Centauri Has a Planet!

Okay. Let’s take a look at Alpha Centuari, a binary star system located within a mere 5 light-years from Earth. In the bottom corner of the image, you can see a red dwarf star called Proxima Centauri, which is believed to be a companion to the Alpha Centauri pair. And in orbit of Promixa, you can see… you can see… ohmigod! 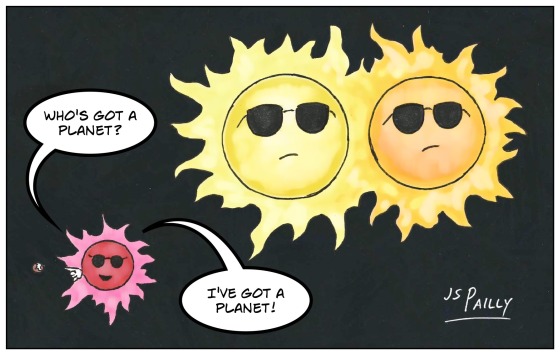 Apparently the European Southern Observatory (ESO) has discovered a planet orbiting Proxima. Not only that, it’s an Earth-like planet. And furthermore, it’s within Proxima’s habitable zone. This according to an unnamed source in a German newspaper.

The ESO is a highly respected, extremely trustworthy astronomical institution. As for unnamed sources… okay, let’s put our skeptical hats back on.

Let’s also remember that Earth-like planets are not necessarily all that Earth-like. For the last few weeks, I’ve been blogging from the surface of Titan, which is often described as one of the most Earth-like worlds in the Solar System. And let me tell you, it is miserable here. I guess there could be life on Titan, but not life as we humans understand it.

Mars is also sometimes described as Earth-like, and believe it or not, so is Venus.

Supposedly the ESO will release its official findings at the end of August. Until then, we’ll just have to sit back, wait patiently, and stay skeptical.