Don’t feel too bad for Pluto. Pluto has a lot of new dwarf planet friends out in the Kuiper belt. Today, we’re meeting the dwarf planet known as:

Haumea is a funny looking object. It’s sort of bulgy at the middle. Just look at this totally legit Hubble image I found.

Okay, that’s actually not a Hubble image. Haumea is so small and so far away from Earth that we can’t get a clear image of it, not even with Hubble. So how do we know what Haumea looks like?

In our telescopes, Haumea appears as just a tiny point of light, but its brightness fluctuates at regular intervals. The best explanation for this is that Haumea must be misshapen. As the dwarf planet rotates, the wider sides reflect more sunlight than the narrower sides. 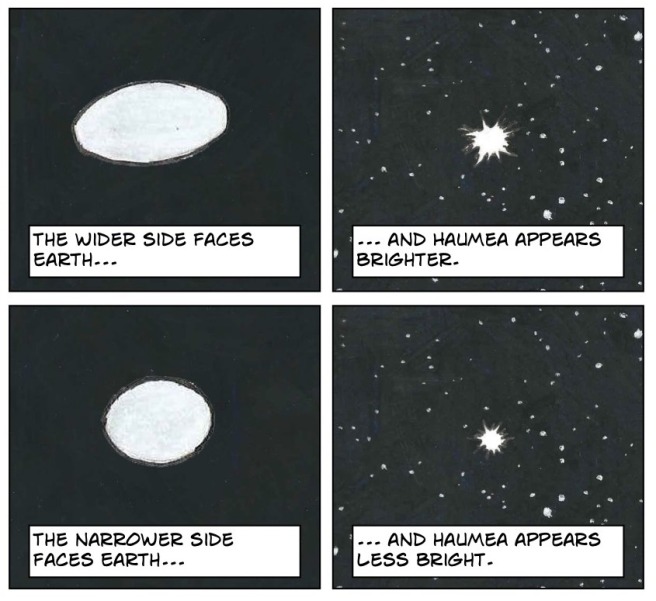 The changing brightness also tells us Haumea’s rate of rotation. As it turns out, a Haumean day is less than four hours.

Gravity tries its best to pull Haumea into a spherical shape, but planets (and dwarf planets) always tend to bulge a little at the equator due to their own rotation. Since Haumea rotates extra fast, it’s extra bulgy, and also somewhat elongated along one axis. Hence the peculiar, oval shape in the fake Hubble image above and also in many other artistic renderings of what Haumea might look like.

So even though we’ve never actually photographed Haumea, we know it’s a funny looking object. The question I really want to know is how many other Haumea-like planets and dwarf planets might be out there in our universe?

Today’s post is part of Pluto/Kuiper belt month for the 2015 Mission to the Solar System. I can’t believe this mission is almost over! Click here to find out more about this series.