The 2015 Mission to the Solar System has finally brought us to Pluto, so for today’s edition of Sciency Words, let’s talk about the scientific term:

In 2006, the International Astronomy Union established the first ever official definition of a planet. To be a planet, an object must:

Pluto failed this last test. We now know that Pluto is just one of many small, icy objects in a sort of second asteroid belt known as the Kuiper belt.

To qualify as a dwarf planet, an object must:

So did the I.A.U. get it right? Do these definitions of planet and dwarf planet make sense? Some astronomers would say no (don’t get too excited, Pluto fans; it’s not for the reason you think).

How are we supposed to apply these definitions to exoplanets, planets orbiting other stars? Most exoplanets cannot be observed directly. The few that are visible in our telescopes appear as just a few pixels. So how can we see if they’re spherical? How can we tell if there’s debris in their orbital paths or not?

The I.A.U. is now considering defining planets in a more mathematical way, using the following factors:

If the mathematics work out such that an object should be able to clear its orbital path of debris within a predetermined timeframe (10% of the host star’s lifespan, perhaps), then it qualifies as a planet.

We can safely assume that any object with enough mass to clear its orbit would be also spherical, due to its own gravity. So astronomers wouldn’t have to visually confirm that an exoplanet is round.

Right now, this idea is only a proposal. But if the I.A.U. adopts this new definition of planet, it can be applied equally well to objects in our own Solar System and objects orbiting distant stars.

P.S.: Under the new definition, Pluto still isn’t a planet. 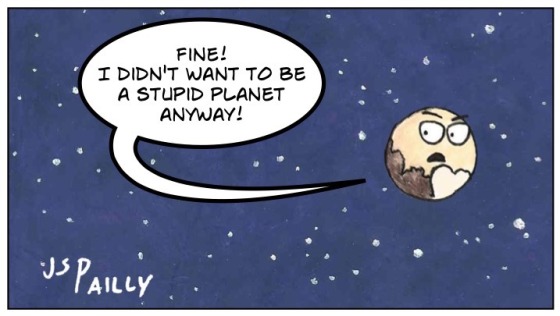 A Quantitative Criterion for Defining Planets by Jean-Luc Margot.

A New “Mathematical” Definition Proposed for What Constitutes a Planet from Universe Today.

Today’s post is part of Pluto/Kuiper belt month for the 2015 Mission to the Solar System. Click here to learn more about this series.