Welcome to Molecular Mondays! Every other Monday, we examine the atoms and molecules that serve as the building blocks of our universe, both in reality and in science fiction. Today we continue our investigation of: 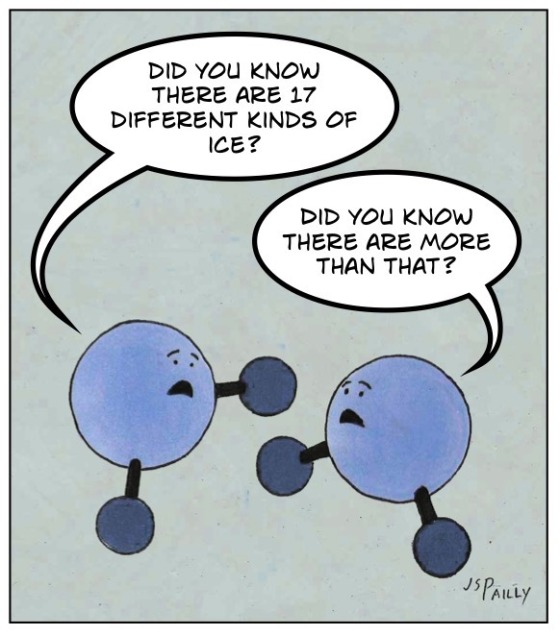 In my previous Molecular Monday post, I told you about some of the exotic forms of water ice believed to exist on other planets, where pressures and temperatures are radically different than what we’re familiar with here on Earth.

But those seventeen forms of ice were only crystalline ices, ices where the water molecules line up to form neat geometric patterns. It takes energy (heat) for water to crystallize. That may seem counterintuitive, but consider that 0º C is a whole lot hotter than absolute zero.

In the darkest depths of space, it’s too cold for water to crystallize. Instead, water molecules freeze solid in a random, haphazard way. This is called amorphous ice, or sometimes porous ice, and it is believed to be the most common form of water in the universe (even though it hardly ever appears here on Earth, except under laboratory conditions).

Also, because amorphous ice has a random structure, microscopic cavities often form between water molecules. That’s why it’s also called porous ice. Other chemicals can get trapped inside these internal pores. Melting the ice (or even adding heat to crystallize the ice) could accidentally release those chemicals, or allow them to mix, with unpredictable results.

In the distant Sci-Fi future where humanity has spread throughout the Solar System and beyond, interplanetary travelers will be dependent on whatever sources of water they can find in space. Appropriate safety measures should be put in place for harvesting water from comets, asteroids, or even small icy moons like Europa or Enceladus. Amorphous ice can be full of unpleasant surprises.