Today’s post is part of a special series here on Planet Pailly called Sciency Words. Each week, we take a closer look at an interesting science or science-related term to help us all expand our scientific vocabularies together. Today’s word is:

There is a growing need among planetary scientists to study an ice giant up close. We keep discovering ice giant size planets orbiting distant stars, but we know next to nothing about the two ice giants in our own Solar System: Uranus and Neptune. 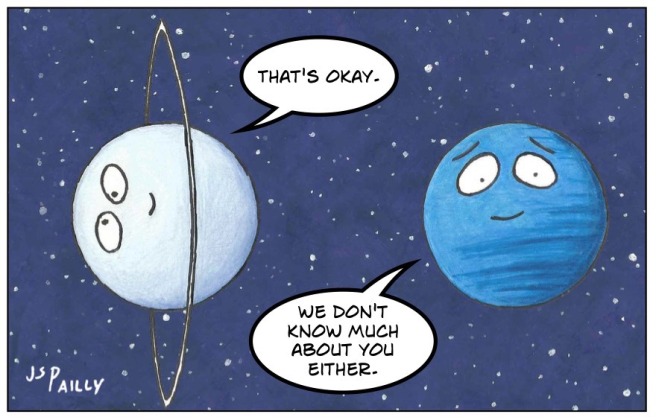 To get to know these two planets better, NASA will have to launch a robotic mission of some kind. But which kind? There are three mission classes, defined primarily by their price tags:

In relation to the ice giants, everyone seems to agree that a discovery-class mission could never reach Uranus or Neptune. A new frontiers mission could work, especially if it’s just a flyby mission like the recent New Horizons flyby of Pluto.

But to really get up close and personal with an ice giant, we need to send an orbiter. That will be expensive, and it will require NASA to commit to a flagship mission.

Upcoming flagship missions will focus on Mars (another Curiosity style rover) and Europa (potential home to alien fish). So despite the growing need among planetary scientists to study an ice giant up close, there probably won’t be a Uranus or Neptune orbiter any time soon.