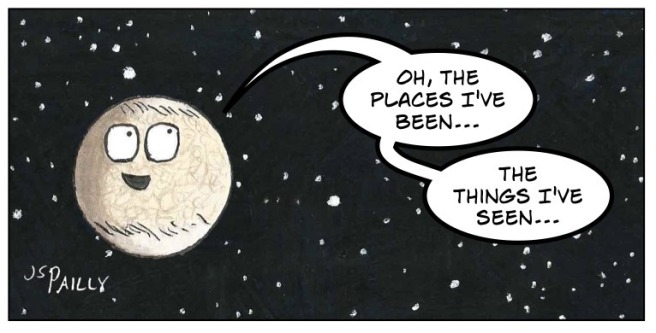 Triton is in a retrograde orbit, meaning that as Neptune rotates in one direction, Triton orbits in the opposite direction. 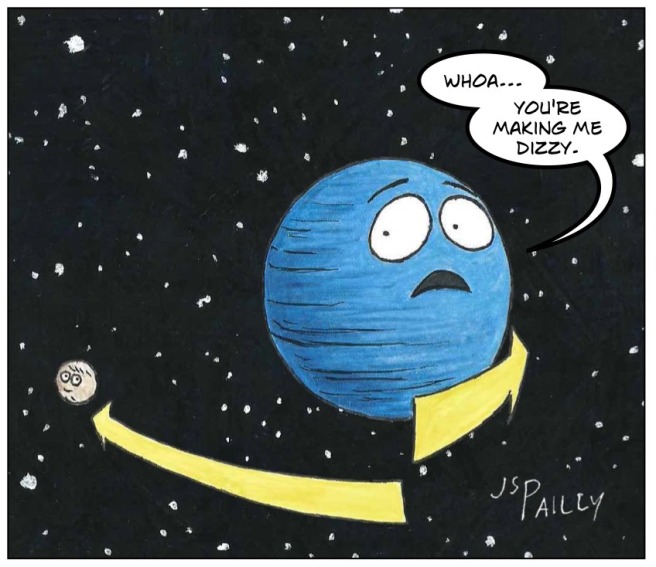 This weird orbit strongly suggests that Triton is not one of Neptune’s “natural children” but rather an “adopted child.”

So who knows where Triton originally came from? As usual, scientists have two competing theories.

One day, as Triton was going along minding its own business, it happened to pass a little too close to Neptune. Neptune would have has a few moons already, and one of those moons happened to be on a collision course with Triton!

The collision would have altered Triton’s momentum and trajectory through space, allowing Neptune’s gravity to capture it.

The problem with this explanation is that the hypothetical moon that hit Triton had to have been just the right size: big enough to change Triton’s orbit but not so big that it could destroy Triton in the collision.

And this just-right-sized moon would have to have been in just the right place at just the right time in order for the collision to occur. Stranger coincidences have happened in our universe, but this scenario is a little too unlikely for my taste.

Instead, let’s imagine that Triton was once part of a binary planet system, similar to the Pluto-Charon binary. Such binaries appear to be common in the Kuiper belt, as are binary asteroids in the asteroid belt and elsewhere.

One day, Triton and its binary partner strayed too close to Neptune. This resulted in a gravitational tug-of-war, with Neptune pulling in one direction and Triton’s companion pulling in the other. Neptune won, and due to Newton’s whole equal and opposite reaction thing, Triton’s companion was flung off into deep space. It may have even been ejected from the Solar System.

These sorts of gravitational tug-of-wars happen far more frequently than collisions, and this scenario does not depend on Triton’s hypothetical partner (or any other object in space) being perfectly sized or perfectly positioned.

That doesn’t prove that the binary planet hypothesis is correct, but it does sound a lot more likely than the alternative.

Whatever happened, Triton’s introduction into Neptune’s family would have had interesting effects. Triton is large for a moon (almost twice as massive as Pluto), and its initial orbit around Neptune would have crossed paths with many of Neptune’s much smaller moons. That means more gravitational tug-of-wars, creating chaos in the Neptune system.

Gradually, tidal forces pulled Triton into a more circular (and less disruptive) orbit, but those tidal forces would also have caused Triton’s interior to heat up dramatically. Today, Triton still shows evidence of active cryovulcanism and may have subsurface liquid water, just like Europa, Enceladus, or many other moons in the outer Solar System.

Which means we can add Triton to the list of places in the Solar System that may support extraterrestrial life.

Neptune’s Capture of Its Moon Triton in a Binary-Planet Gravitational Encounter from Nature.

Is Triton Hiding an Underground Ocean? from Universe Today.

Life Beyond Earth: A Day on Triton (Neptune’s Largest Moon) from Quarks to Quasars.

3 thoughts on “The Strange Story of Triton”