The title of today’s post may seem like a moronic question, but Jupiter’s Great Red Spot is known to change color, ranging from brick red to ruddy orange to salmon pink. At times, it turns almost white. While the Red Spot remains somewhat mysterious, this color variation may have given us a clue as to what the heck is going on on Jupiter. 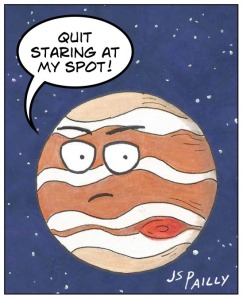 Currently, there are two competing explanations for the color of the Great Red Spot (or G.R.S.): the endogenic and photolytic hypotheses.

As you may already know, the G.R.S. is a gigantic hurricane (technically, it’s an anticyclone). According to the endogenic hypothesis, this huge, vortex-like storm dredges up dark red material from lower layers of Jupiter’s atmosphere. If that’s true, then the G.R.S. is giving us a peek into Jupiter’s interior.

But there’s a problem with this idea. If the G.R.S. is made of layer upon layer of red stuff, it should appear darker, and it certainly shouldn’t change color so much.

Therefore, an alternate hypothesis is currently winning the scientific debate.

By mixing two chemicals, ammonia and acetylene, in a lab and exposing the mixture to ultraviolet radiation, scientists were able to replicate the distinctive red color associated with the Great Red Spot.

On Jupiter, the G.R.S. billows up above the surrounding clouds, reaching altitudes approximately 8 kilometers (5 miles) above the gas giant’s “surface.” The vortex-like nature of the storm could keep ammonia and acetylene trapped near the top, prolonging their exposure to ultraviolet rays from the Sun.

Beneath the topmost layer, G.R.S. clouds would likely appear light grey or pure white, and the storm’s observed color variations could be explained by influxes of fresh ammonia and acetylene.

The scientific debate isn’t over. The photolytic hypothesis, so popular at the moment, will no doubt face challenges. The endogenic hypothesis, which seems to have fallen out of favor lately, might be revived, or perhaps an entirely new explanation will come to light.

Meanwhile, we need to collect more data. Which means humanity will continue to stare at Jupiter’s Red Spot with our telescopes. Occasionally, we might try poking it with our space probes. 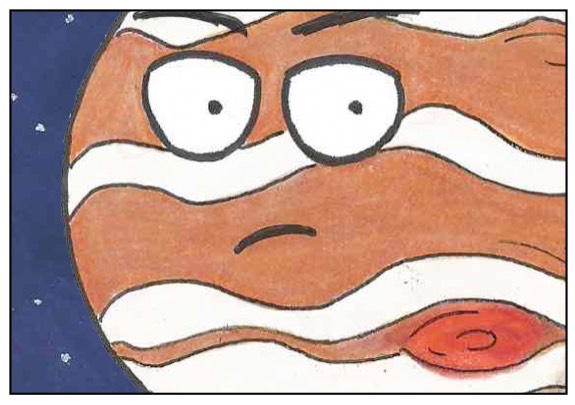 Why is Jupiter’s Great Red Spot… Red? from Sky and Telescope.

Today’s post is part of Jupiter month for the 2015 Mission to the Solar System. Click here to find out more about this ongoing adventure.

2 thoughts on “What Color is the Great Red Spot?”