The classic story of an inventor tinkering in his basement is a thing of the past.  Most new discoveries require NASA sized budgets, enormous research facilities, and the support of governments, large corporations, or major universities.  Except that isn’t always true.

Recently, a fifth-grade student named Clara Lazen invented an entirely new molecule.  Her science teacher had handed out the traditional ball and stick model pieces to make molecules, and she assembled a bunch of carbon, oxygen, and nitrogen in a completely new and unexpected way.  When she was done, she asked if she’d made a real molecule. 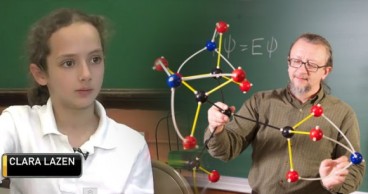 Clara and her science teacher.

Her teacher and a chemist at Humboldt State University have determined that it is an entirely new molecule.  Clara’s molecule, which has the catchy name of tetranitratoxycarbon, may even be useful for energy storage.  Now her name will appear on a paper in a major scientific journal.

Everyday people like Clara can still make major discoveries.  Science is not just for the well-funded.  Tetranitratoxycarbon might even help us solve the energy crisis, but most importantly, Clara and her classmates reportedly have a new enthusiasm for science, something that is rare in American children these days.