Today’s post is part of a special series here on Planet Pailly called Sciency Words.  Each week, we take a closer look at an interesting science or science-related term to help us expand our scientific vocabularies together. Today’s term is:

I did a Sciency Words post on the word dinosaur before, when I participated in last year’s A to Z Challenge, but I never felt satisfied with that post.  For one thing, I missed a golden opportunity to tell you one of the coolest sciency things I’ve learned: dinosaurs are not extinct.

Or rather, to be more technical about it, dinosaurs are or are not extinct depending on how you define the word dinosaur.  You see we have two different systems for classifying life: the traditional Linnaean system and an alternative system called cladistics.

In 1735, Swedish botanist Carl Linnaeus published his book Systema Naturae, introducing the world to his system of binomial nomenclature.  All of a sudden, we humans became Homo sapiens, our cats became Felis catus, and so forth.  But under Linnaeus’s system, plants and animals (and also minerals) had to be classified purely according to their physical characteristics, not their evolutionary heritage.  Darwin’s On the Origin of Species wouldn’t be published for another 124 years.

Then in the 1950’s, German entomologist Willi Hennig introduced a new and improved system which he called phylogenetic systematics, but which has since been renamed cladistics.  A “clade,” in cladistics, is a group of animals that share a common ancestor, and if one animal is part of any given clade, then all of that animal’s descendents are part of that clade too, according to Hennig’s system.

So because birds evolved from dinosaurs, birds are dinosaurs, claudistically speaking.  Birds are like a subcategory of dinosaur.  And thus the dinosaurs are still here, strutting and flapping about on this planet. 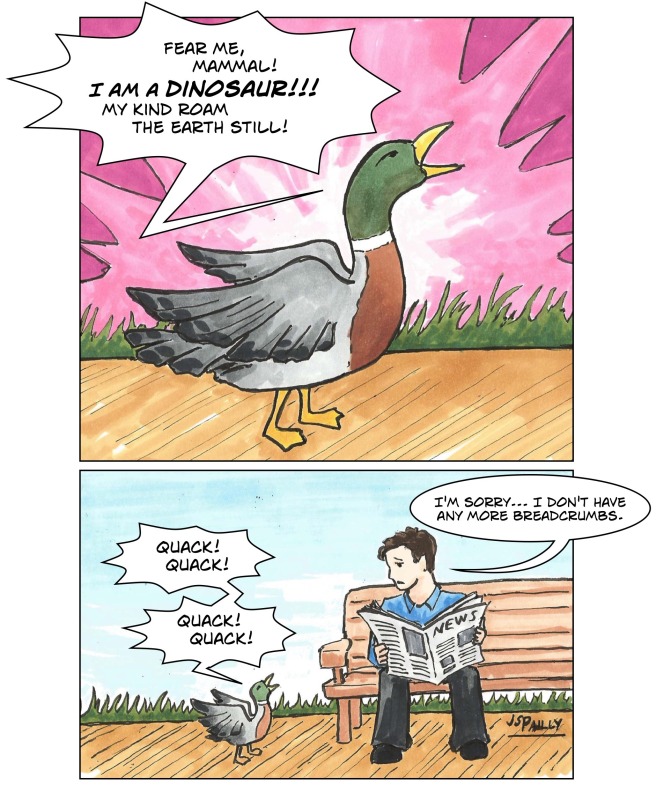