Today’s post is a special A to Z Challenge edition of Sciency Words, an ongoing series here on Planet Pailly where we take a look at some interesting science or science related term so we can all expand our scientific vocabularies together. In today’s post, N is for:

In 1896, J.J. Thomson discovered the electron: a subatomic particle with a negative electric charge. Then in 1932, Carl Anderson discovered a new kind of electron. It was exactly the same as the old one, except it had a positive charge.

Anderson decided to name this new kind of electron a positron, and he wanted to retroactively rename the old one a negatron. 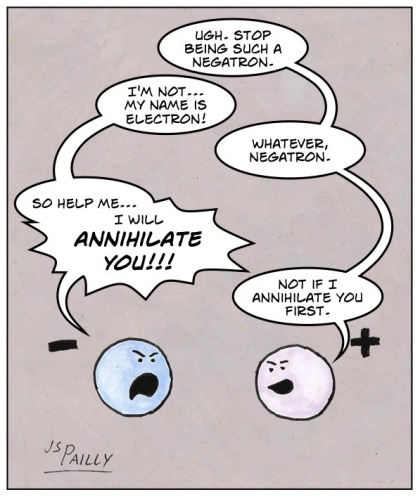 Anyway, under Carl Anderson’s naming scheme, we’d still get to use the word electron, but electron would be sort of like a genus name, with positron and negatron being two species of electron. That’s a nifty way to think about matter/antimatter pairs, if you ask me. Too bad the idea didn’t stick.

Or so I thought….

To my surprise, I was able to find negatron in a dictionary—a standard dictionary, not even a special dictionary of science. To my further surprise, spell-check recognizes negatron as a word. According to Google ngrams, the word is still in use, and when I did a search on Google Scholar, I found a ton of papers—recent papers—using the term in relation to nuclear physics.

So that subatomic particle pictured above—whether it likes it or not, it really is a negatron.

Next time on Sciency Words: A to Z, it’s dangerous to name a concept before you fully understand it.

11 thoughts on “Sciency Words: Negatron (An A to Z Challenge Post)”