In 2005, astronomers discovered the Solar System’s tenth planet, and they named it Xena.

The International Astronomy Union promptly stepped in and renamed it Eris… 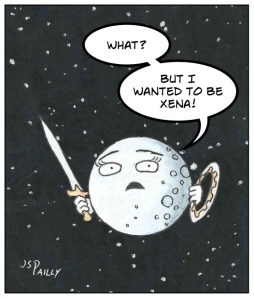 … and reclassified Eris as a dwarf planet.

Eris has a rather wonky orbit. At closest approach to the Sun, Eris travels just inside the orbit of Pluto. Then it journeys far off into space, to a distance almost three times as far away before looping back again.

Combine this high eccentricity with a high inclination. Eris’s orbit is tilted by almost 45º relative to the rest of the Solar System. As a result, while Eris is sometimes called the  most massive object in the Kuiper belt, it really isn’t a Kuiper belt object at all. It’s more like a Kuiper belt visitor.

That seems really strange, but if there’s one thing I’ve learned during this 2015 Mission to the Solar System, it’s that what seems strange at first turns out to be quite normal.

Many astronomers would classify Eris as part of the scattered disk. The scattered disk is a collection of objects that are… well… scattered. And there are lots of these scattered objects in wildly eccentric and/or inclined orbits. It’s sort of like our neat and orderly Solar System is surrounded by a swarm of bees.

When I was a kid, the Solar System was easy. Just memorize these nine planets and remember there’s an asteroid belt between Mars and Jupiter. The discovery of Eris marked the beginning of a whole new understanding of the Solar System.

Now we have eight planets, an asteroid belt, the Kuiper belt, the Oort cloud (maybe), and at least two “detached objects” (coming soon to Sciency Words). The Solar System has become crazy complicated, and each new discovery only seems to make things more complicated yet—which is why Eris’s official name is oddly appropriate. In Greek mythology, Eris was known as the goddess of discord.

P.S.: Today’s post is the final post for the 2015 Mission to the Solar System. I have traveled (metaphorically at least) from the Sun all the way out to the Kuiper belt, and I’ve shared some of the fruits of my research here on my blog. I’ve had a lot of fun on this adventure, and I hope you have to. Everyone have a safe and happy New Year, and I’ll see you all in 2016.