Makemake is a pretty typical dwarf planet. It has a nice, spherical shape, unlike Haumea. Its nearly circular orbit keeps is well inside the Kuiper belt at all times, unlike Pluto or Eris; however, Makemake’s orbit is inclined 29º relative to the plane of the Solar System.

Kuiper belt objects with such extreme inclinations are collectively known as the “hot population.” Why are they hot? Because scientists are bad at naming things. The hot population is just as cold as the rest of the Kuiper belt.

Based on current estimates, Makemake is either the third or fourth largest Kuiper belt object, after Pluto, Eris, and possibly Haumea. Makemake and Haumea are similar enough in size that astronomers can’t be sure which is bigger. The current best guess seems to be that Makemake is slightly larger.

The weirdest thing about Makemake is that it appears to have no moons. This is truly surprisingly. Most dwarf planets and indeed many known Kuiper belt objects have managed to pick up a moon or two. With so much rocky and icy debris floating around, it’s hard not to.

Yet somehow, Makemake has managed to stay single, making this “hot population” dwarf planet the Kuiper belt’s most eligible bachelor. 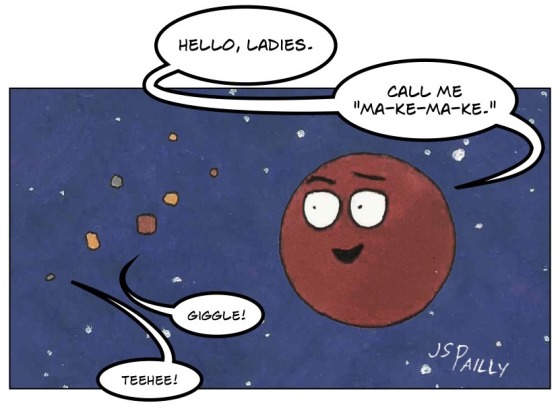