Today’s post is part of a special series here on Planet Pailly called Sciency Words. Each week, we take a closer look at an interesting science or science-related term to help us all expand our scientific vocabularies together. Today’s word is:

When it comes to large, rocky objects drifting through space, naming conventions can get tricky. Many are called asteroids. Others go by stranger names. Some of these objects are called centaurs. 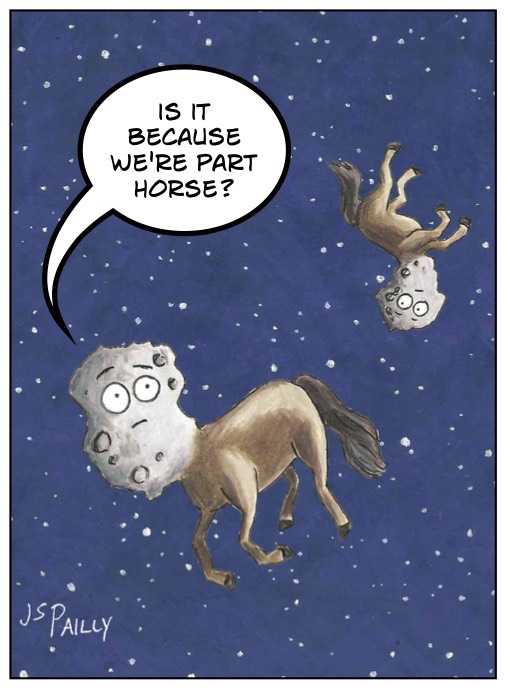 Eh… no. It has nothing to do with horses, although these objects are sort of half one thing and half another. Most if not all centaurs could be classified as both asteroids and comets.

It is believed that most centaurs used to be Kuiper belt objects or objects from the scattered disk: basically, they were those large, icy things hanging out beyond Neptune. Due to gravitational interactions with Neptune and other gas giants, these objects have been pulled into increasingly eccentric (non-circular) orbits.

Eventually, most of these objects will transform into comets, with orbital paths that cut through the inner Solar System and bring them within melting distance of the Sun (allowing them to form cometary tails).

The Interanational Astronomy Union (I.A.U.) originally wanted to name all centaurs after actual centaurs from Greek mythology. However, some have been named after other hybrid or shape-shifting creatures, which I think is perfectly appropriate. Examples include Typhon (a snake or dragon hybrid), Ceto (a sea monster goddess), and Narcissus (a man who transformed into a flower).

In the future, centaurs could conceivably be named after the minotaur, the sphinx, or perhaps even Dracula. If the I.A.U. wants to have some fun, they could also use names like Ariel from The Little Mermaid, Constable Odo from Star Trek: Deep Space IX, or any of the Animagus characters from Harry Potter.

In fact, throughout fiction and mythology, there are plenty of hybrids and shape-shifters to chose from. So what names do you think the I.A.U. should give the next centaur asteroids?

Centaurs: Cross-Dressing Comets That Go as Asteroids from Discovery News.