For today’s Molecular Monday post, I had planned to continue my investigation of water. However, the 2015 Mission to the Solar System has just brought us to Titan, Saturn’s largest moon, and Titan’s potential biochemistry demands some special attention. 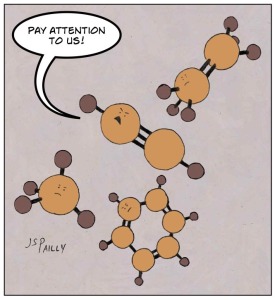 So we’ll continue studying water in the next Molecular Monday post.

Titan is a lot like Earth, except it’s also a lot different than Earth. Both have air and bodies of liquid on their surfaces, but on Titan, the air doesn’t contain oxygen, and the liquid is not water.

Titan’s atmosphere is 95% nitrogen, with methane constituting most of the remaining 5%. Exposure to sunlight causes the methane molecules to break apart and recombine into other, more complex hydrocarbons, which drizzle down to the moon’s surface.

It seems unlikely that Titan’s lakes are home to enormous sea monsters. The available chemicals would probably limit the size and complexity of Titanian life forms to microbes.

Compared to life on Earth, or even theoretical life on Mars, Europa, or Enceladus, Titan’s microbes would be weird. Really weird. They could still be carbon-based, but they’d have to substitute liquid methane and/or ethane for water. They’d also have to perform cellular respiration without oxygen, perhaps using hydrogen instead.

The breakdown of methane by sunlight produces, among many other things, molecular hydrogen (H2) and acetylene (C2H2). According to David C. Catling’s book Astrobiology: A Very Short Introduction, microbes on Titan could derive energy from these two chemicals via the following chemical formula.

The 2CH4 byproduct is two molecules of methane. If true, this would conveniently explain how Titan replenishes the methane in its atmosphere, which is continuously being broken down and recombined by sunlight.

Whether or not life exists on Titan, the possibility of hydrogen-breathing aliens opens up some intriguing possibilities for science fiction. Especially since hydrogen is far more common in our universe than oxygen.