For the month of August, I’ve decided to forego my regular Molecular Monday posts. Instead, each Monday this month, we’re going to meet a moon, specifically a moon of Jupiter, starting with: 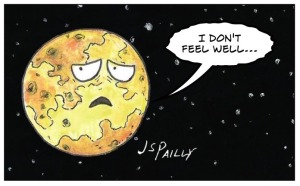 Io doesn’t look much like a celestial body. It looks more like something I might find growing in the back of my fridge. So what the heck happened to this poor moon?

Of Jupiter’s four largest moons (collectively known as the Galilean moons) Io is the closest to Jupiter. With Jupiter’s enormous gravity on one side and the gravities of the other three Galilean moons on the other, Io is trapped in an endless gravitational tug-of-war. Who wouldn’t feel queasy being pulled in so many different directions at once?

As a result, Io ends up constantly puking its guts out. By the word “puking,” I refer volcanic activity, and by “guts” I mean warm interior materials. These interior materials have a high percentage of sulfur and sulfur compounds. All that sulfur, which has been spewed liberally across Io’s surface, gives the moon its nasty, yellow-green complexion.

Months ago, we talked about the remote possibility that sulfur-based microorganisms could exist in the soupy atmosphere of Venus. I suppose a similar biochemistry could be possible on Io. It’s a stretch, but at least some astrobiologists think the possibility is worth investigating.

Next week, we’re going to me another of Jupiter’s moons, a moon with a much, much higher likelihood of supporting alien life.

Today’s post is part of Jupiter month for the 2015 Mission to the Solar System. Click here for more about this series.