Welcome to Molecular Mondays! Every other Monday, we examine the atoms and molecules that serve as the building blocks of our universe, both in reality and in science fiction. Today, we turn our attention to:

The Waters of Mars

If you ever find yourself on Mars, do not drink the water. And not just because of a certain episode of Doctor Who.

In real life, the waters of Mars probably won’t transform you into a space zombie, but they still might kill you or at least leave you severely dehydrated. That’s because Martian water is saltwater.

What’s So Dangerous About Saltwater?

Human beings need water. We also need salt. Given those two facts, you’d think drinking saltwater would be great! But introducing all that salt to your system all at once dramatically raises the salinity (salt content) of your blood. You don’t want that.

To lower your blood’s salinity, water molecules will start passing through your cell membranes in a valiant but futile effort to dilute the salt to more acceptable levels. 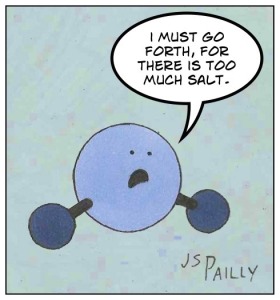 Ultimately, your body will flush all the excess salt AND excess water out through your urine. In the end, drinking saltwater causes you to lose more water than you gain.

What Do Saltwater Fish Do?

Most organisms here on Earth that live in saltwater environments do so by either actively pumping salt out of their bodies or constantly rehydrating (i.e.: drinking like a fish) to replenish all the water their cells are losing.

What About Life on Mars?

P.S.: As you’re probably aware, the freezing point of saltwater is lower than that of regular water. Given how cold Mars is, the high salinity of Martian water is a big part of why Mars has liquid water in the first place.

Mars Perhaps Too Salty for Life from Space.com.

Salt of the Early Earth from Astrobiology Magazine.

Surviving in Salt Water from American Museum of Natural History.

Do Fish Drink Water? from SciShow.

Today’s post is part of Mars month for the 2015 Mission to the Solar System. Click here for more about this series.

4 thoughts on “Molecular Monday: The Waters of Mars”