April is Earth month here on Planet Pailly, but after two weeks of blogging about the planet Earth, I’m ready to move on. 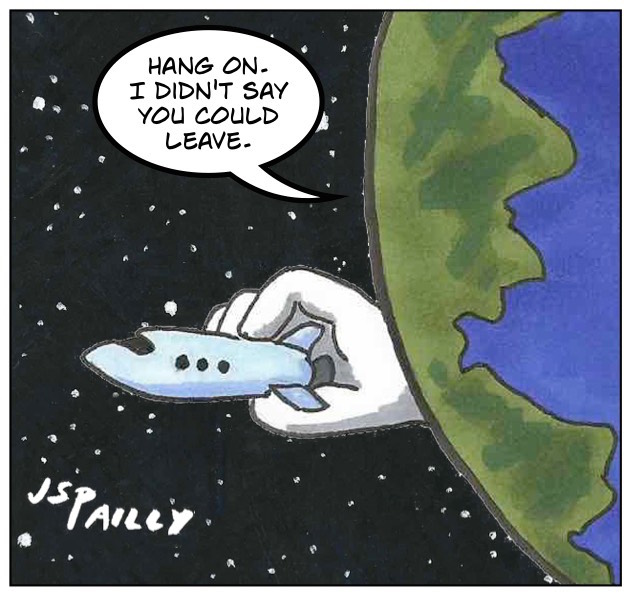 Unfortunately, escaping Earth’s gravity is far easier said than done. The high, high cost of getting to space can be quantified using something called the ideal rocket equation (also known as Tsiolkovsky’s rocket equation or simply the rocket equation).

The equation is as follows:

Delta-v (∆v) represents the total change in velocity you’re aiming to achieve in any rocket-propelled maneuver, including liftoff. In order to reach low Earth orbit from the ground, your delta-v must equal at least 9.4 kilometers per second. To get that value, you’ll need to adjust the other variables in the equation.

However, increasing the difference between initial and final mass only creates a logarithmic increase in delta-v (the “ln” part of the equation is a natural logarithm). This means that adding more and more fuel produces diminishing returns. At some point, this is no longer a cost effective way to increase your delta-v.

Your other option is to use a more energetic fuel, increasing your effective exhaust (ve). Unfortunately, modern rockets already use some of the most effective chemical fuels available. With current technologies, the only way to significantly improve the ve part of the equation is with nuclear powered rockets, which might raise a few safety concerns, to say the least.

What Does All That Mean?

Due to the rocket equation, fuel constitutes 80 to 95% of a rocket’s mass at launch. Even a tiny satellite requires absurd amounts of fuel to reach space.  This means launching anything into space is expensive (sometimes prohibitively expensive).

The problems associated with the ideal rocket equation are usually glossed over or ignored in science fiction by invoking new technologies or new laws of physics. But embracing the rocket equation and world-building within its limitations could lead to an intriguing setting for a Sci-Fi story. More on that in next week’s edition of Sciency Words.

P.S.: It’s possible that somewhere in the universe, life has evolved on a planet with even higher surface gravity than Earth’s. If so, these aliens would have an even harder time reaching space than we do. In fact, for some alien civilization out there somewhere, the rocket equation may make it effectively impossible to leave their home planet at all.

The Tyranny of the Rocket Equation by NASA astronaut Don Pettit.

Rocket Golf from What If?