With this new Molecular Mondays series, I’m challenging myself to dive into the world of chemistry. As a science fiction writer, I really should know this stuff. Just because I had some bad experiences in high school chemistry class doesn’t mean I can keep avoiding the subject forever.

I have long suspected (and now know for certain) that my biggest problem with chemistry is that I don’t understand oxidation. In school, the concept was explained in a dreadfully confusing way. As I recall, I was told that oxidation has nothing to do with oxygen, and then I was given examples of how the process works, all of which involved oxygen.

So before I go any further with chemistry, I need to get this straightened out.

At this point in my research, I can say that the name oxidation is slightly misleading, as is the name of oxidation’s counterpart chemical process: reduction.

Scientists sometimes name newly discovered phenomena before they are fully understood. By the time a phenomenon can be better explained, it’s often too late to change the name. Thus, reduction means gaining electrons and oxidation does not necessarily have anything to do with oxygen.

It seems that the first time oxidation was studied scientifically, oxygen was the main culprit. When oxygen bonds with other atoms, it sort of hogs electrons. 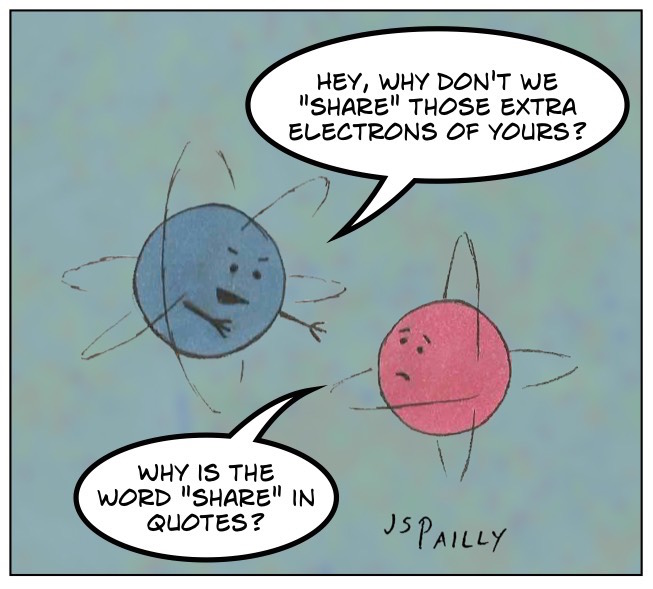 So because of its particular greed for electrons, oxygen does a whole lot of oxidizing. But we now know oxygen is by no means the only element that does so.

The next few editions of Molecular Mondays will continue to focus on oxidation—or rather, redox reactions as a whole. I’ll try my best to keep you updated on how my studies are progressing. Any advice, insight, or encouragement would be greatly appreciated.

P.S.: One of the best chemistry resources I’ve found so far is the YouTube series Crash Course: Chemistry with Hank Green (the guy from Sci Show). Hank has done a great job getting me started on this subject.