On Thursday, we talked about what it would take to terraform Venus. Turning Venus into another Earth is, in short, difficult. So instead, how about we turn Earth into another Venus? 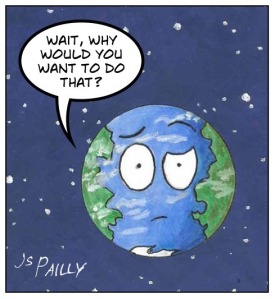 In the worst-case scenario for climate change, accumulating greenhouse gases in Earth’s atmosphere trigger a runaway greenhouse effect analogous to what happened long ago on Venus. Hence the name “Venus syndrome.”

Here’s how Venus became the charming hellhole we know today:

So could this happen on Earth? Could manmade greenhouse gases initiate a runaway greenhouse effect, ultimately boiling our oceans and sublimating the carbon and sulfur in Earth’s crust?

The problem is we don’t know the point at which slight changes to Venus’s environment began spiraling out of control. This makes Venus the subject of rather urgent research by both climatologists and planetary scientists.

Venus syndrome is a worst-case scenario, meaning it’s the greatest extreme on a spectrum of possibilities. But that doesn’t mean we can ignore it. The story of humanity’s exodus from a Venus-like Earth needs to be told, perhaps as science fiction, before it has the chance to become science fact.

2009 Assessment Report from the International Panel on Climate Change.

Venus and Mars Hold Priceless Climate-Change Warnings for Earth from The Daily Galaxy.

Could Greenhouse Gases Turn Earth into Venus? (Yes, But Not Anytime Soon) from Mother Jones.