Today’s post is part of a special series here on Planet Pailly called Sciency Words.  Every Friday, we take a look at a new and interesting scientific term to help us all expand our scientific vocabularies together.  Today’s word is:

According to the dictionary, eccentricity means deviating from the established norms, especially in an odd or whimsical manner.  I’m sure we’ve all met eccentric people at some point in our lives.  In high school, I was involved in musical theatre, so I got to see eccentricity up close and personal.  But did you know actors and actresses aren’t the only ones who behave eccentrically?  The term can also be applied to the behavior of planets.

The established norm for a planet’s behavior is to orbit a star.  To be more specific, planets are supposed to circle stars, as in their orbits should be perfect circles.  The less circular a planet’s orbit is, the more eccentric it is said to be.  In fact, a planet’s eccentricity can be quantified by measuring just how un-circular its orbit is. 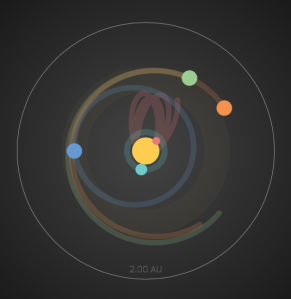 One of my planets in Super Planet Crash has a highly eccentric orbit. Can you guess which one?

The thing is, according to Kepler’s laws, no planet has a perfectly circular orbit.  The “established norm” is a myth.  They all travel along slightly ovular paths, sometimes coming a little closer to the Sun, sometimes moving a little farther away.  So it turns out that, just like people, all planets are at least a little eccentric.

P.S.: Today’s post is related to a series here on Planet Pailly about sciency video games.  To find out more, click here.  To start playing Super Planet Crash, a game where you can see eccentric planets in action, click here.

Posted by J.S. Pailly on May 23, 2014 in Sciency Words and tagged Super Planet Crash.