When Albert Einstein died, his doctors removed his brain so it could be studied.  They carefully dissected it, taking lots of photos, and preserved the pieces of jars.  As disgusting as this may seem to us now, apparently it was common practice at the time whenever an especially intelligent person died.  It also means we now have some idea as to why Einstein was such a genius. 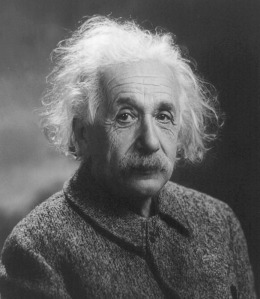 There’s a bundle of nerves called the corpus callosum which connects the right and left hemispheres of the human brain, but according to researchers Einstein had a larger and thicker corpus callosum than most of us.  It’s like the two sides of his brain were connected by rope where the rest of us have only a few tangled strings.

You’ve probably heard about the difference between the left and right brains before.  The left side is supposedly more creative while the right is more analytical.  Left-brained people tend to be artists while right brainers make better scientists and engineers and accountants.  You might assume a theoretical physicist like Einstein would be a right brain type of guy, but it seems he was one of those lucky few who could use both sides equally well.

Of course we already knew this about Einstein, not from the dissection of his brain but from the things he said and did when he was alive.  He was a brilliant physicist, but he also played the violin.  Whenever he was stuck on some vexing mathematical problem, he often wandered over to his piano, played for a few minutes, then went back to his physics with some new insight.  And of course Einstein was most famous for his thought experiments, experiments he conducted not in a laboratory but in his own imagination.

My question I have is this: was Einstein born with his abnormally well wired brain, or is the brain more like a muscle, its parts growing and atrophying depending on how you use them?  Whatever the answer, it seems clear that the key to true intelligence is to try as best as we can to use our whole brains, not just one side or the other.

P.S.: I’m nearing completion of a new Tomorrow News Network story, and this one happens to be about Albert Einstein, specifically his brain and what scientists might do with it in the distant future.  Click here to read a preview scene from the upcoming short story “Einstein’s Clone.”