As researchers continue to study squiddish, the language of squid, they are running into an interesting linguistic problem. The problem isn’t with squiddish. It’s with humanese.   We humans don’t have the proper terminology to describe the complex behavior squid use to communicate. 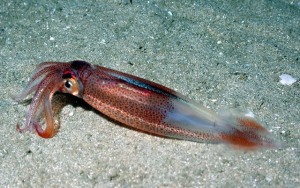 Last week, we talked about chromatophores, the special cells that allow squid to change colors. Squiddish consists of rapid combinations of color patterns and body postures. The 2003 scientific paper “Squid Say It with Skin” attempts to document squid language and suggests terms to describe the “words” or “phrases” of squid speech. Examples include:

My favorite is “double signaling”: the simultaneous display two different color patterns, one on each side of the body. In other words, a squid can say one thing to its buddy on the left while saying something completely different to its friend on the right.   This skill will surely come in handy once squid develop a concept of politics.

Our lack of proper terminology is a problem we humans will continue to struggle with as we learn more about nature and our universe. Scientists will just have to keep inventing new words, which means we’ll always have something to talk about here on Sciency Words.