Something’s wrong with a star named KIC 8462852. It flickers. It dims by as much as 22% for no apparent reason. This is an F-type main-sequence star, meaning it’s only a little bit larger than our Sun. F-type stars shouldn’t behave like this.

KIC 8462852 is sometimes called the WTF Star, because of the paper that first described its abnormal fluctuations in brightness. That paper was subtitled “Where’s the Flux?”

The star is also known (and perhaps better known) as Tabby’s Star, in honor of Tabetha Boyajian, the lead author on that paper.

There are several possible explanations for what might be happening to Tabby’s Star, but it’s the least likely explanation that’s gotten the most hype. Could it be aliens? SETI decided to check it out. They didn’t find anything. But still… it could be aliens.

Massive alien starships might be transiting the star, blocking some of its light. Or perhaps there are enormous space stations orbiting the star. Or maybe we’ve caught an advanced alien civilization in the act of building some kind of megastructure (like a Dyson sphere) completely encircling their sun.

Most professional astronomers do not think it’s aliens. Tabetha Boyajian herself doesn’t seem to take the idea seriously and often jokes about the crazy emails she gets from people who do. And to be perfectly clear, I do not take this alien megastructure hypothesis seriously either.

But just to be sure, I’ve decided to hop into my imaginary spaceship and fly out to KIC 8462852, just so I can see for myself what’s really going on. Wish me luck! I’ll let you know what I find next week. 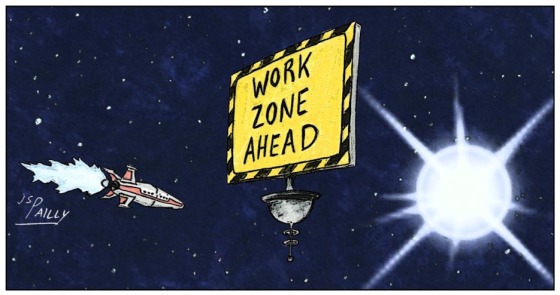