Again, these antelope are all the same species of antelope. But because of a geographic barrier, the two groups rarely if ever intermix or interbreed. As a result, one group has developed thicker wool than the other, or they have slightly different antler shapes, or there’s some other distinctive characteristic that one group has and the other doesn’t.

When you find distinctly different groups within the same species, the groups are called ecotypes. Typically, this sort of differentiation occurs within a species because ecotypes are living in separate ecological habitats.

I first encountered this term in a recent article in Scientific American. As a science terminology enthusiast, I find this to be an interesting kink in the ongoing debate over how to define the word “species”—but the article I read was about something even more interesting than that.

If we ever learn to communicate with orcas (killer whales), we should tell them about Shakespeare. 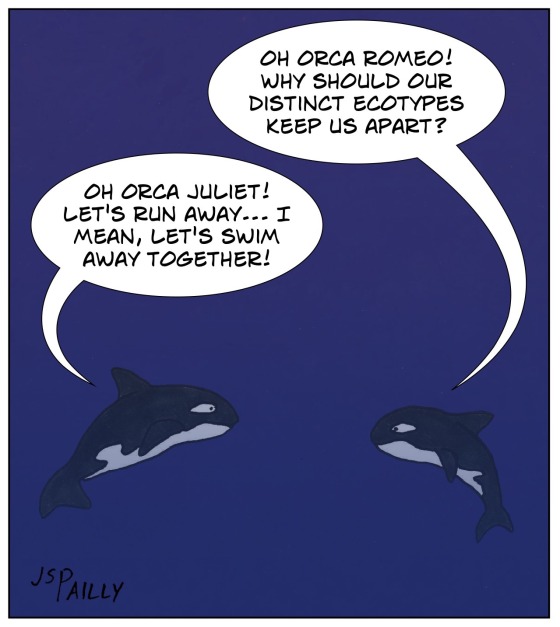 Orca ecotypes don’t mix, even though there’s nothing stopping them. They’re genetically compatible. Their territories overlap. They encounter each other in the open ocean all the time, but apparently they don’t like to intermingle due to what Scientific America calls “cultural differences.”

We should be careful about anthropomorphizing animal behaviors. When Scientific American says orcas have “cultural differences,” they mean they have different hunting and feeding practices. And also different clicking/whistling patterns for communication.

Actually, that does sound a little bit like orcas have human-like languages, and maybe even a primitive version of human-like culture. And those linguistic and cultural barriers are enough to keep them apart. We really should tell them about Shakespeare. They’d probably understand a lot of Shakespeare’s themes.

P.S.: You may have missed it, but I was trying to make a West Side Story reference with that thing about antelope. 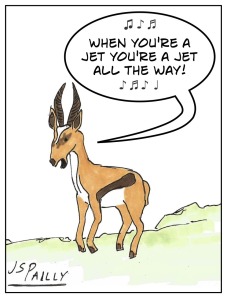 Posted by J.S. Pailly on December 30, 2016 in Sciency Words and tagged Biology.